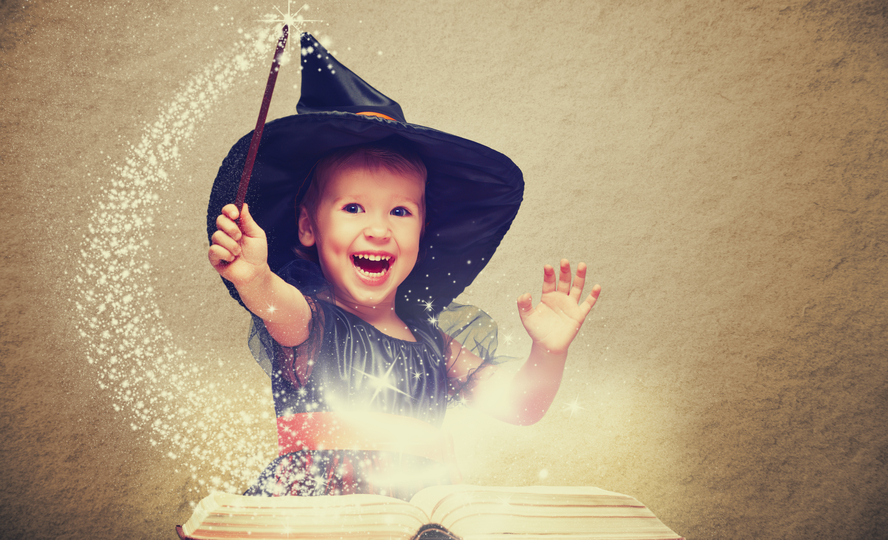 A little witch casting a spell

To spell means ‘to name, say, or write the letters of a word’ and also, figuratively, ‘to mean or signify.’ As a noun, a spell has a really different meaning. It’s a word or phrase with magic powers, as well as the state of enchantment caused by it. Figuratively, any state of fascination is also called a spell. A spell is also a continuous period of activity, an indefinite period of time, and a period of a type of weather.

cast a spell: say the words of a magic spell in order to put somebody under its influence. Example: “The witch cast a spell on the old man and turned him into a horse.” Figuratively, this can also mean to fascinate. Example: “Any sort of screen–TVs, computers, phones–they all seem to cast a spell over children.”

dry spell: literally a period without rain, but figuratively any period when you are short of anything you need or want. Example: “Business is bad at the moment; we’ve been going through a dry spell for months.” Or “I don’t know why no one ever asks me out, but my love life is a disaster at the moment. I’m going through a real dry spell.”

The song I Put a Spell on You was famously sung by Nina Simone.

It’s also featured in the classic American Halloween movie Hocus Pocus, where three witches sing it while casting a spell on the guests at a Halloween party. Watch out for stars Bette Midler and Sarah Jessica Parker, who play two of the singing witches. Notice how the meaning changes from sensual and figurative to magical and literal between the two songs.

Spell dates back to before the year 900. The Old English noun spell, from the Proto-Germanic word spellam, meant ‘story,’ ‘saying,’ ‘tale,’ or ‘fable,’ as well as ‘discourse’ or ‘command.’ While the spelling of the word did not change, its meaning did. By the year 1200, it had come to mean ‘utterance,’ ‘statement,’ or ‘remark.’ The magical sense, ‘a set of words with magical or occult powers,’ ‘an incantation,’ or ‘a charm,’ first appeared in the late 16th century. It is important to note that, even though the meaning can be positive or negative, spell is usually used negatively, while charm is usually used for ‘good magic.’

The verb spell, meaning ‘to write or say the letters of a word,’ or ‘to form words using letters’ comes from the same Proto-Germanic root, spellam, but took a different path into English. Despite an Old English verb with a related meaning (spellian: to tell or speak), the meaning we know comes from the Anglo-French espeller, meaning ‘to signify or interpret,’ as well as ‘to pronounce, recite, or spell out letters,’ and first appeared in the early 14th century. The other meanings of spell, related to a length of time, come from a different Old English verb, spelian, which meant ‘substitute,’ ‘represent,’ or ‘work in place of another.’ Its current meaning of ‘work in place of another’ first appeared in the late 16th century. The noun use came soon after, in the early 17th century, and by the 18th century, it had spread to mean ‘a stretch of time in general.’

See full definition
Learn more about spell in our forums

Spell in other languages