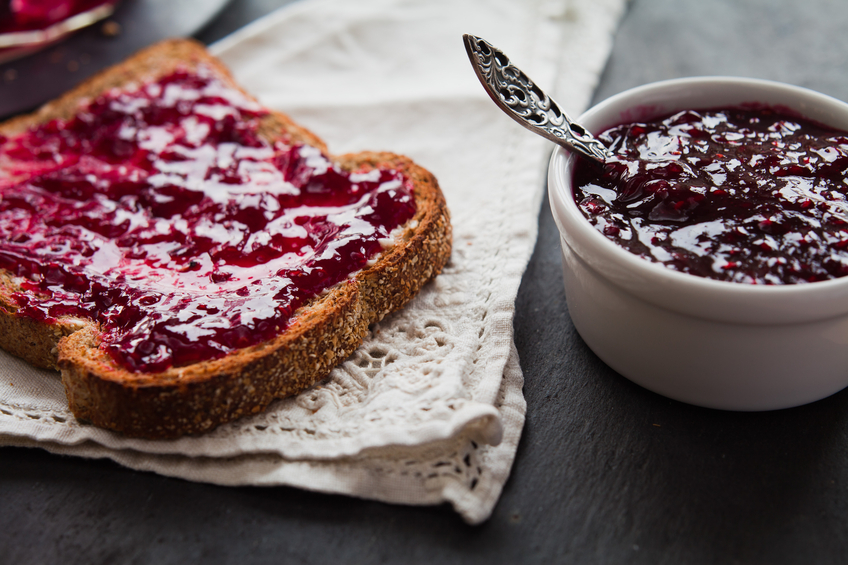 Toast with jam is a common breakfast food.

To jam means ‘to press or squeeze in a small space,’ ‘to block by crowding,’ and ‘to push violently on or against something’ or ‘to put something in position with a quick movement.’ In addition, jam means ‘to interfere with a radio or TV signal’ and, when we say that a machine jams, we mean that it is no longer usable. In music, to jam means ‘to play in a spontaneous and improvised way.’ As a noun, a jam is the state of being jammed and, colloquially, it is a hard and complicated situation.

jam session: a period spent jamming, musically. Example: “The band agreed to meet up for a jam session over the weekend.”

In Jamaican culture, jam also means ‘to get together,’ often to celebrate something (which is probably related to the music sense). There’s a famous song called “Jammin‘” by the reggae singer Bob Marley and you can listen to it and read the lyrics here:

In the UK, jam is also a sweet preserve made of fruit, or occasionally vegetables, and sugar. The fruit and sugar are boiled until they reach a point where they set (become firm) and then the mixture is put into jars for storage. It is mainly eaten on toast for breakfast. In the US this type of preserve is also called jelly, whereas in the UK, jelly is a dessert made from gelatin.

Jam, the verb, dates back to around the year 1700, with the meaning ‘to become wedged’ or ‘to wedge something tightly.’ Nobody’s sure where the term came from, but some think it may be imitative (the sound something wedged tightly would make). Others think it may be a variation on a Middle English verb, cham (meaning ‘to bite down on something’ or ‘move your teeth together’). Jam, the fruit preserve, is also from the early 18th century, and probably comes from the verb (to make jam, you crush fruit up while it’s cooking). The noun, meaning ‘the state of being jammed,’ first appeared around the year 1800.

The mechanical meaning of jam, when a machine does not function, first appeared in the mid-19th century (as both a verb and a noun), and the meaning spread to interfering with a signal in the 20th century. The musical sense appeared in 1929, and was coined by jazz musicians.

See full definition
Learn more about jam in our forums

Jam in other languages