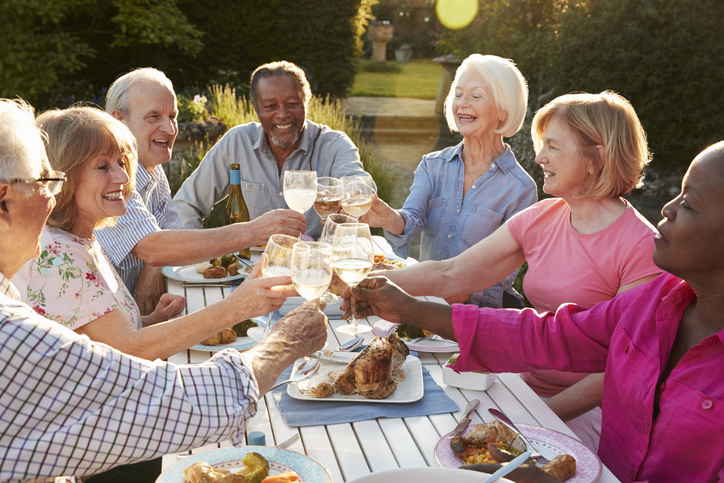 Toast may refer to a piece of bread, slightly browned and crisp, that is usually eaten for breakfast, or the action of cooking bread or other food to brown it. It may also refer to a proposal to drink (or the action of drinking) in honor of somebody or something, like at a wedding reception or a dinner party.

be toast: a slang expression, meaning that someone is in trouble or will face serious consequences. Example: “If you break Mom’s antique vase, you’re toast!”

french toast: bread soaked in egg and then fried. In other countries, a similar dish is eaten as a dessert, but in the US this is a breakfast food, often served with maple syrup and butter, and sometimes even whipped cream. This can be called “eggy bread” in the UK.

toast of the town: a figurative expression that means that someone is celebrated in the community for an accomplishment. “Gemma has been the toast of the town since she raised $100,000 to renovate the animal shelter.”

It is traditional for various people to make toasts at weddings, and usually they make a speech before proposing that everyone drinks to the bride and groom. The best man’s toast is usually full of banter about the groom and often includes some slightly embarrassing stories. However, especially as people often drink a little too much at weddings, sometimes it can go a bit too far, as you can see in this clip from the movie “The Wedding Singer:”

In the browned bread sense, toast is uncountable, so instead of asking for two toasts you should ask for two slices (or pieces) of toast.

In the 17th century, it was customary to put pieces of spiced toast in wine or ale. When people drank to the health of someone, usually a lady, it meant that she gave flavor to the drink, just like the spiced toast.

In some countries, like Austria, Germany, and Greece, the word toast is used for a grilled cheese sandwich and not a single toasted slice of bread.

Toast dates back to the mid-14th century, as the Middle English verb to(o)sten, meaning ‘to roast bread’ or, more generally, ‘to brown with heat.’ It came into English from the Old French toster, which can be traced back to the Vulgar Latin tostare (to brown something with heat), a frequentative of the Latin torrere (to parch) and the Proto-Indo-European root ters– (to dry). Toast is related to the Spanish tostar and the Italian tostare (both meaning ‘to toast’), as well as the Sanskrit tarsayati (dries up), the Avestan tarshu– (dry or solid), the Greek teresesthai (to be or become dry) and tersainein (to make dry), the Latin terra (earth or land), the Gothic þaursus or tharsus (dry or barren), the Old High German thurri and German dürr (dry), and English words such as Mediterranean, subterranean, terra, terrace, terrain, terrier, territory, thirst, torrent, torrid and tumeric. The noun, meaning ‘a piece of bread browned by heat,’ comes from the verb, and dates back to the early 15th century. It was originally meant to be spiced and put into wine or ale, and only started to be eaten on its own in the 17th century. A toast, meaning ‘a proposal to drink in honor of someone or something,’ dates back to around the year 1700 (though a few linguists think it may be older), and comes from the idea of spiced toast put into drinks, as you read above. The verb, meaning ‘to propose or drink a toast,’ also dates back to around the year 1700, and comes from the related sense of the noun. The expression to be toast was first used in the 1980s, possibly a figurative take on computer circuits overheating and being destroyed, but it may also echo an older expression with a similar meaning, to be served on toast, which was used in the 19th century.

See full definition
Learn more about toast in our forums

Toast in other languages