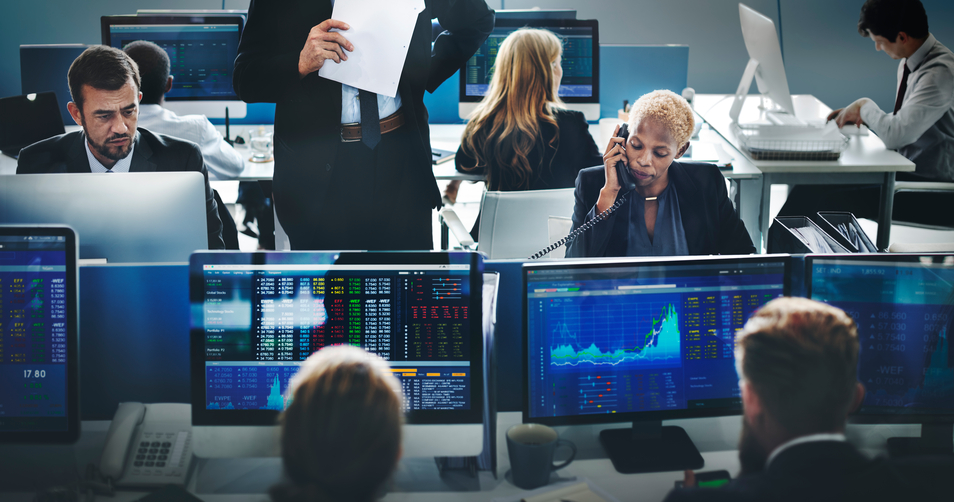 Traders work with the stock market.

A trade is the act of exchanging goods for money, or without payment, and a business deal. A trade is also an occupation and manual or mechanical work. Trade is also a synonym for ‘market.’ As a verb, to trade means ‘to buy and sell’ or ‘to exchange things.’ Trade also means ‘to use something or someone to your advantage, for illegal or immoral purposes.’ As an adjective, trade refers to anything related to commerce or to a particular occupation.

trade in: to exchange something used as a partial payment for something new. Example: “We just got a new car. We didn’t think we could afford it, but the sales rep gave us a good deal for trading in our old one.”

trade on: take advantage of. Example: “Kevin isn’t a nice guy; he trades on other people’s weaknesses to get what he wants.”

trade up: exchange something of lower value for something of higher value. Example: “You’ve had that old car for years now; isn’t it about time you traded up?”

Trade unions (this is the name in British and Australian English; they are called labor unions in US English or labour unions in Canadian English) are organizations of workers, often in a specific trade, who come together to campaign for better working conditions and pay––things that individual workers may struggle to achieve on their own. Trade unions began in Britain in the 18th century and became particularly popular at the time of the Industrial Revolution. There are many trade union songs. Perhaps one of the best known UK working class singer/songwriters, who often sings about workers and their rights, is Billy Bragg. Here you can listen to him singing a song written by Joe Hill in 1913, “There is Power in a Union:”

The trade winds are the pattern of winds found in the tropics. The term emerged in the 14th century when trade meant ‘track,’ ‘trail,’ or ‘path.’ They were very important in the days of sailing ships, when a ship’s captain would have to find the right trade or path to follow, so that the wind would blow the ship in the direction he wanted to go.

Trade dates back to the mid-14th century. The Middle English verb traden (now trade) meant ‘course, path or track,’ and probably came from Middle Low German or Middle Dutch. The origin can be traced back to the Old Saxon verb trada, which is also the root of the Old English tredan (where the modern verb tread comes from).

See full definition
Learn more about trade in our forums

Trade in other languages

Intermediate+ Word of the Day: flay