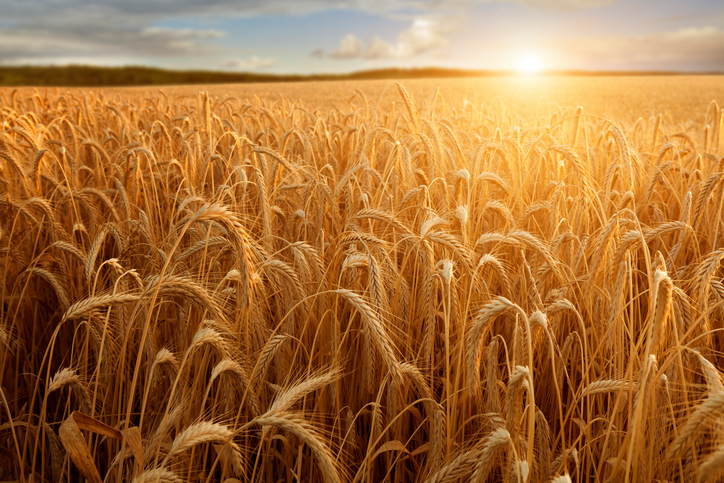 This year's wheat crop is excellent.

A crop is a plant or its product, either while growing or when gathered, or the amount of yield produced in one season. It’s used figuratively to mean ‘a group of people or things that occur together.’ Crop is also a close or short cut of something, such as hair. As a verb, to crop means ‘to cut off the top of a plant’ or ‘to cut part of something off.’ To crop also means ‘to cut hair short’ or ‘to graze.’

crop up: occur unexpectedly. Example: “I’m sorry, I can’t make it to the meeting after all. Something has cropped up.”

Related to the meaning of cutting part of something off, crop is also a word used in photo editing, to mean ‘to cut part of a picture.’ Example: “That’s a lovely picture of the scenery, but the old rusty car on the edge of the photo spoils it. Can you crop that out?”

The noun crop can also be used as an adjective when talking about clothing, normally tops, that are shorter than normal. Example: “Wearing a crop top means you can show off how toned your abdomen is.” You can see a crop top in this commercial.

A word that is often, but not always, interchangeable with crop, when talking about plants, is harvest. Harvest can be used to talk about the amount of yield of something in a year and about the gathered produce or the plants when ripe to be gathered. However, harvest does not refer to plants while they are in the process of growing. Unlike crop, harvest can also be used to talk about the period of the year when plants or their produce are gathered.

Crop dates back to before the year 900. The Old English cropp and Middle English crop originally meant “bird’s craw’ as well as the ‘top or head of a sprout or herb.’ The meaning soon expanded to mean ‘the top of any plant, including the crown of a tree,’ and later came to mean ‘the part of the plant we eat.’ The meaning of ‘harvest product’ dates back to around the year 1300. It is related to the German noun Kropf. The verb, meaning to ‘cut off the top of a plant,’ comes from the noun, and dates back to the early 13th century. Its more general meaning, ‘to cut off,’ is from the 15th century.

See full definition
Learn more about crop in our forums

Crop in other languages