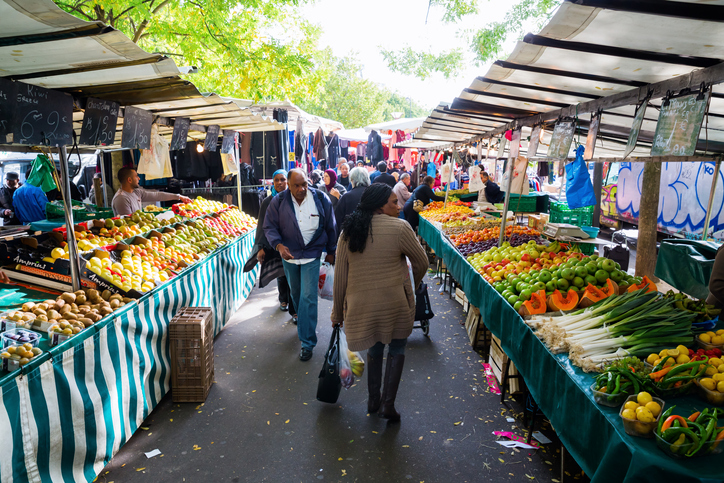 As a noun, a stall is an individual compartment for an animal in a stable or cowshed. It can also be a booth or stand where merchandise is displayed for sale, like you might find at a market, or any enclosed spaced destined for a particular purpose (although this latter sense is more common in US English). The related verb to stall is used to talk about vehicles and it means ‘to come to a stop’ or ‘to cause to suddenly stop functioning.’ Figuratively, to stall means ‘to be interrupted or impeded’ and, informally, it also means ‘to delay,’ especially when avoiding answering something.

Listen to John Lee Hooker singing “Time is Marching” here. Listen out for the lyric “Oh, why should you stall me around, baby?”

In US English, stall is used far more commonly than it is in UK English to mean any sort of compartment. Shower stalls and bathroom (or: toilet) stalls are common examples. In the UK, the word “cubicle” is more commonly used for these. In US English, a stall can also be a parking space, usually one that is just marked out, rather than enclosed.

If you’ve ever learned to drive, you probably know what it means if you stall a car (and you’ve probably done it a few times). However, if a plane stalls, that has a slightly different meaning, as explained in this video:

Stall, meaning ‘a place in a stable for animals,’ dates back to before the year 900. The Old and Middle English steall originally meant ‘a stable or place where cattle are kept,’ ‘a fishing ground’ or ‘a standing place, position or state,’ and can be traced back to the Proto-Germanic stalli– and the Proto-Indo-European stol-no-, a suffixed form of the root stel– (to put, stand or put in order). Stall is related to the Old Norse stallr (‘pedestal for idols or altar’ as well as ‘crib or manger’), the Old Frisian stal and Old High German stall (stand, place, stable or stall), the German Stall (stable) and Stelle (place), the French étal (a butcher’s stall) and the Italian stallo (place) and stalla (stable), as well as the Greek stellein (‘to put in order or make ready,’ ‘to equip or dress with weapons or clothes,’ ‘to prepare for a journey,’ ‘to dispatch,’ or ‘to furl the sails’), the Armenian stełc-anem (to prepare or create), the Albanian shtiell (to wind up, reel up or collect), the Old Prussian stallit (to stand), and English words such as apostle, forestall, install, pedestal, stale, stalk, stallion, still, stilt, stole and stout. The meaning ‘a stall for selling‘ (mid-13th century) and other related senses evolved through the influence of the Anglo-French estale (‘market stall,’ ‘stall in a stable’ or ‘station or position’), which comes from the same Germanic root. The sense ‘pretense to avoid doing something’ appeared in the early 19th century, but evolved from an earlier, obsolete sense, ‘thief’s assistant’ (late 16th century), which was originally staller, and came from the earlier stale, meaning ‘decoy’ (mid-15th century), from the Anglo-French estale, which, again, can be traced back to the same origin. The related verb, meaning ‘to distract a victim’ (usually for a pickpocket), dates back to the late 16th century, and comes from the noun. The more common sense, ‘to be evasive, play for time or prevaricate,’ was first used in the early 20th century. Finally, the verb stall, meaning ‘to come to a stand’ as well as ‘install,’ ‘place an animal in a stall’ or ‘place in office’ dates back to around the year 1400. Its origin is uncertain, and it has been traced back to the Anglo-French estale as well as the Old English steall. Either way, it can be traced back to the same origin as all of the other senses. The sense ‘to become stuck or set fast’ appeared in the mid-15th century. The sense related to engines, ‘to lose motion or power, or cause to lose motion or power,’ dates back to the early 20th century, and its use regarding aircraft (to lose lift) first appeared just a few years later. The related noun, meaning ‘the action of losing motion, power or lift’ comes from this sense of the verb and also dates back to the early 20th century.

See full definition
Learn more about stall in our forums

Stall in other languages