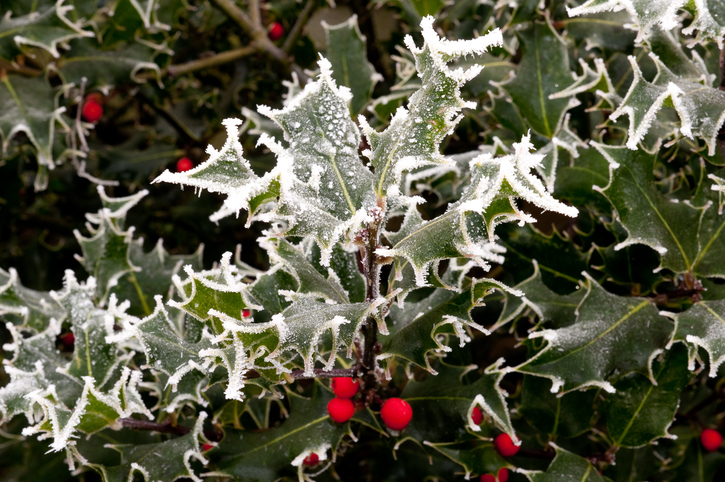 Frost is a degree or state of coldness that is enough to cause the freezing of water, and also a layer of tiny ice crystals that forms at night upon the ground and that covers things. Figuratively, coldness in temper or manners is also frost and, informally, something that’s not well or enthusiastically received is also a frost, although this sense is dated. As a verb, to frost means ‘to cover with frost’ or, if we are talking about plants, ‘to injure or kill by frost.’ Informally, in US English, it means ‘to make very angry.’

You can listen to the classical cold weather song “Frosty the Snowman,” and read the lyrics, here:

To frost can also mean to decorate a cake with frosting, a sweet coating made from sugar. It is most commonly used this way in the US. In the UK, people are much more likely to use the verb to ice with this meaning and to call the coating icing. In the UK, fruit cakes covered in marzipan (a sweet almond paste) and icing (or: frosting) are a traditional part of the food eaten at Christmas. This video shows you how to ice (or: frost) a Christmas cake:

Frost dates back to before the year 900. The Old and Middle English noun, which meant ‘frost, act of freezing, frozen precipitation or extreme cold,’ has been found as both frost and forst. Both forms of the word were common until the late 15th century, when frost became the accepted form of the word. It’s possible that this is due to it being more similar to related words in other Germanic languages. Frost can be traced back to the Proto-Germanic noun frustaz (meaning ‘frost’), and the Proto-Indo-European root preus-, which meant ‘to freeze’ as well as ‘to burn.’ It is related to the Old Saxon, Old Frisian and Old High German frost, and the Middle Dutch and Dutch vorst (meaning ‘frost’), as well as the Sanskrit prusva and the Latin pruina (hoarfrost), the Welsh rhew (frost), the Sanskrit prustah (burnt), the Albanian prus (burning coals) and the Latin pruna (a live coal), and of course the English verb freeze. The verb comes from the noun and, meaning ‘to cover with frost,’ dates back to the early 17th century. The sense ‘to freeze’ is from the early 19th century. The sense ‘to frost a pastry or cake with icing’ dates back to the early 17th century, a figurative play on the fact that icing looks like frost. Frosting has been used as a noun since the mid-18th century, and comes from the verb.

See full definition
Learn more about frost in our forums

Frost in other languages