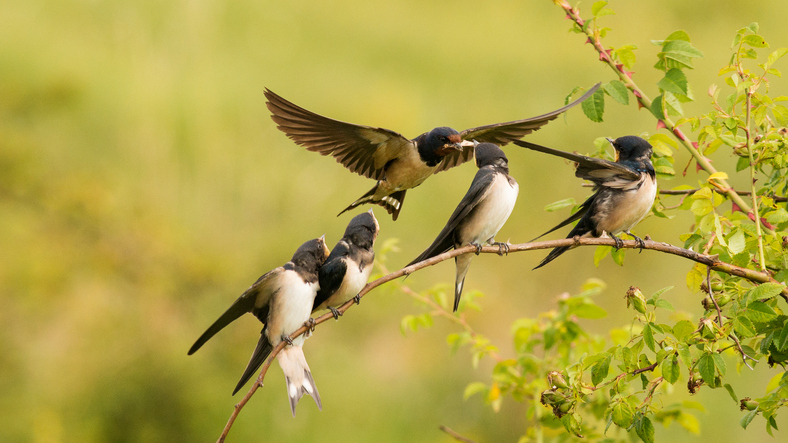 To swallow, as you might already know, means ‘to take something down the throat,’ such as food or drink. It is also used figuratively to mean ‘to accept without questioning’ or ‘to assimilate or absorb,’ in the latter sense, it is often followed by up. If you swallow an emotion, it means that you repress it, and if you swallow your words, that can either mean that you take back what you’ve just said, or that you mutter or pronounce words poorly. As a noun, a swallow is the amount swallowed at one time or the act of swallowing. On a completely different note, a swallow is a small, long-winged songbird known for its swift, graceful flight.

One emotion we all have to swallow from time to time is pride. For example, if you don’t want to admit you don’t know how to do something, but you have to ask for help, then that would be swallowing your pride, or if you have to apologize to someone, even though you think you are in the right. You can listen to the Ramones song “Swallow My Pride” here:

To swallow, meaning ‘to ingest through the throat,’ dates back to before the year 1000. The Old English verb swelgan (to swallow, imbibe or absorb), which became the Middle English swalwen or swelwen, can be traced back to the Proto-Germanic swelgan or swelhan and the Proto-Indo-European root swel– (to eat or drink). It is related to the Old Saxon farswelgan and the Old Norse svelgja (to swallow), the Middle Dutch swelghen and Dutch zwelgen (to swallow or gulp), the Old High German swelahan (to swallow) and the German schwelgen (to revel), as well as the Iranian khvara– (eating). The noun swallow, meaning ‘the act of swallowing,’ dates back to the early 19th century, and comes from the verb. The noun existed much earlier though. Before the year 1000, the Old English noun geswelgh meant ‘gulf, whirlpool, abyss or hole in the earth,’ and later the Middle English swalwe also included the sense ‘throat or gullet.’ The noun then fell out of use until it came back in relation to the verb. Swallow, meaning the type of bird, dates back to before the year 900. The Old English noun swealwe (Middle English swalwe) can be traced back to the Proto-Germanic swalwon and the Proto-Indo-European root swol-wi, and is related to the Old Saxon, the Old Norse, Old Frisian and Swedish svala, the Danish svale, the Middle Dutch zwalewe, the Dutch zwaluw, the Old High German swalawa and the German Schwalbe (all meaning ‘swallow’), as well as the Russian solowej, the Slovak slavik and the Polish słowik (meaning ‘nightingale’).

See full definition
Learn more about swallow in our forums

Swallow in other languages