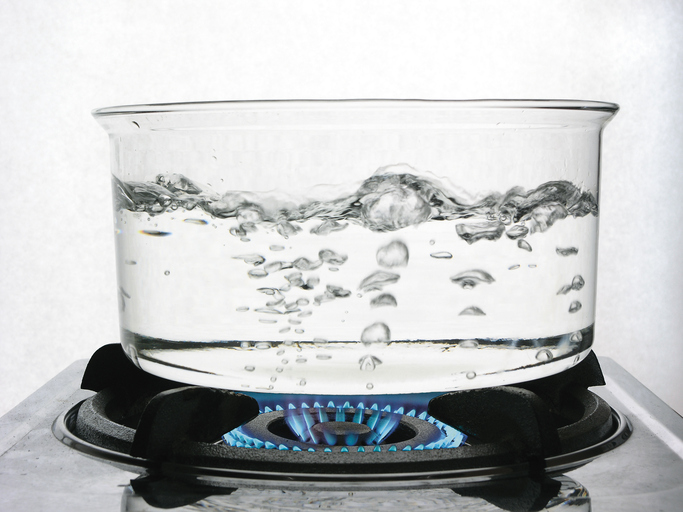 You might already know that to boil means ‘to change from a liquid to a gas as a result of heat’ and, in everyday life, ‘to cook or be cooked in boiling water,’ or ‘to hold boiling water,’ as kettles do. Figuratively, to boil means ‘to be in an agitated or violent state’ and also ‘to be in the grip of a strong emotion,’ usually anger, or, when we are talking about emotions, ‘to seethe or bubble.’ As a noun, a boil is the act of boiling, but also a painful swelling on the skin having pus inside, usually caused by an infection.

boil down: to reduce the quantity of a liquid by boiling it. Example: “Boil the sauce down until it reaches the right consistency.”

boil down to: be able to be summarized as. Example: “What you are saying boils down to the fact that you don’t like my mother.”

boil over: to overflow while boiling. Example: “The milk has boiled over! I’ll have to clean the stove now.” Boil over can also be used figuratively to mean ‘burst forth’ or ‘be irrepressible.’ Example: “Tensions between the people in the neighborhood and the local police have boiled over in recent days, leading to rioting.”

A boiler is an appliance for providing hot water or heating to a building or a tank for creating steam in a steam engine. A boiler room is a room or space containing one or more boilers. In US English, however, a boiler room is also a place where salespeople or people trying to collect donations for charity conduct an intensive telephone campaign, thus creating a high-pressure environment. It is also a place where illicit brokers engage in high-pressure selling, by telephone, of securities of a highly speculative or dubious nature. This latter meaning is what gives the movie Boiler Room its name. You can see the movie trailer here:

If you say someone’s blood is boiling, that means that person is very angry. Example: “Jonathan’s blood was boiling when his friend insulted him, but he managed to calm down by counting to ten.”

Boiler Room is also the name of an online music platform that broadcasts live music sessions hosted in around 100 cities worldwide.

Boil, meaning ‘to bubble up or effervesce’ (especially due to heat) dates back to the mid-13th century. The Middle English noun boillen came from the Anglo-French boillir (to boil, bubble up, ferment or gush), from the Middle French boullir and the Old French bolir. It can be traced back to the Latin verb bullire (to bubble or seethe), from the Proto-Indo-European root beu- (to grow or swell). The meaning ‘to cause something to boil’ dates back to the early 14th century, while the figurative senses regarding feelings and emotions all date back to the mid-17th century. The noun, meaning ‘the act of boiling’ or ‘the state of boiling,’ comes from the verb, and dates back to the early 15th century. The other sense of the noun, ‘a painful swelling on the skin,’ is older. It dates back to before the year 1000. The Old English noun byl or byle (Middle English bile or bele) originally meant ‘boil or carbuncle,’ and came into English from the West Germanic buljon– (swelling). It can be traced back to one of two possible Proto-Indo-European roots, both meaning to grow or swell: beu-, which would make it related to the other senses of boil, or bhel-, which would make it related to the Old Irish bolach (pustule), the Gothic ufbauljan (to puff up) and the Icelandic beyla (hump), as well as English words like bale, balloon, boast, bold, boulder, bowl, bulk, bull, full and fool.

See full definition
Learn more about boil in our forums

Boil in other languages