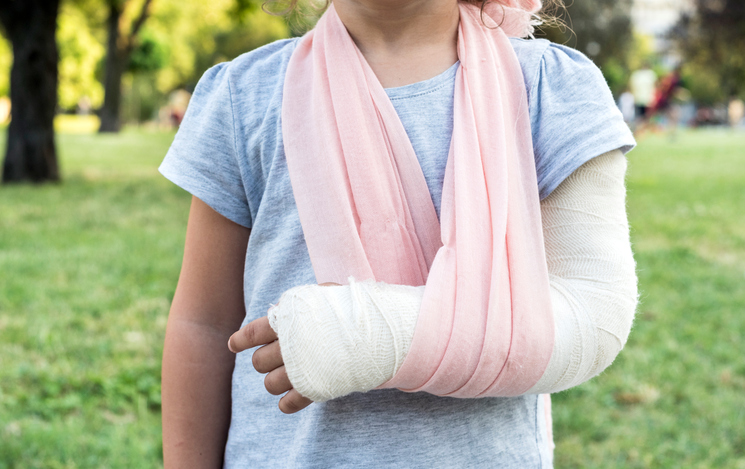 A sling is a a device for throwing a stone or something similar by hand, usually a strap with a string at each end that is whirled around in a circle to gain speed before releasing the rock or stone, and also a slingshot, a Y-shaped stick with a piece of elastic between the forks for shooting small stones or other objects (in UK English, a slingshot is more commonly called a catapult). In medicine, a sling is a very common thing when you injure your arm for example, a strap or band forming a loop by which something is suspended or carried. As a verb, to sling means ‘to throw’ and ‘to hang by a sling or place so as to swing loosely.’

sling hash (US): to work as a waiter or waitress in a cheap restaurant. Example: “When she was in college, Elaine used to spend her summers slinging hash to earn a bit of money.”

Slingshot is the title of a 2015 documentary about the water purification system of the same name. You can watch the trailer here:

A sling is also an iced alcoholic drink, typically containing gin, water, sugar, and lemon or lime juice. Example: “Felice sat in the bar of the hotel drinking a Singapore sling.”

Sling, meaning ‘to knock someone down’ (using a sling) dates back to the late 12th century. The Middle English verb slyngen came from the Old Norse slyngva (to sling or fling), and can be traced back to the Proto-Germanic slingwanan and the Proto-Indo-European slengwh (‘to slide or make slide,’ as well as ‘to sling or throw’). It is related to the Old High German slingan and the German schlingen (‘to swing to and fro,’ or ‘to wind, twist’), the Old English slingan (to creep, wind or twist), the Old Frisian slinge, Middle Dutch slinge, Old High German slinga and German Schlinge (a sling), and the Middle Swedish slonga (a noose, knot or snare). By the mid-13th century, the meaning had expanded to include ‘to throw,’ and the sense ‘to hang between two points’ (as you would a hammock) is from the late 17th century. The noun, meaning ‘a device for throwing rocks,’ dates back to around the year 1300. While it is related to the verb, linguists think it came from a Germanic source from the same origin as the verb, rather than evolving from the verb in English. The meaning expanded in the early 14th century to ‘a loop for carrying heavy objects,’ and this sense was used to mean the medical device for an injured arm in the early 18th century. Sling, the alcoholic drink, dates back to the early 19th century, in US English. It may have come from the verb, with the idea of throwing a drink back,’ or from the German verb schlingen (to swallow).

See full definition
Learn more about sling in our forums

Sling in other languages