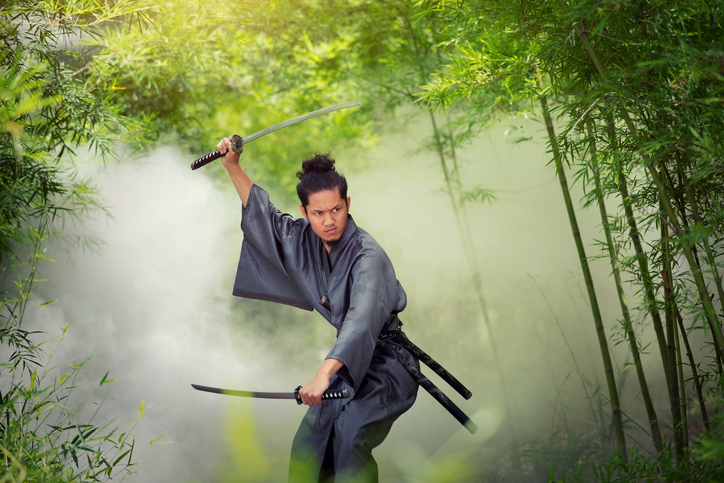 To slash means ‘to cut with a violent stroke‘ and, figuratively, to ‘cut or reduce,’ as might be done with salaries, budgets, or prices. Figuratively, mainly in US English, to slash also means ‘to criticize harshly.’ As a noun, a slash is a sweeping stroke, a wound inflicted by such a stroke, or a reduction. In clothing, it is a decorative slit in a garment showing an underlying fabric. In UK English a slash is a slang term for urination.

Slash is the stage name of British-American musician Saul Hudson. He is perhaps best known as the lead guitarist of Guns N’ Roses. You can listen to Guns N’ Roses singing their song “Sweet Child of Mine,” with Slash on lead guitar, here:

In US English, a slash is an area of wet or swampy ground that is overgrown with bushes or trees. It is frequently used in the plural, slashes, to talk about several such pieces of ground located close together. Also in US English, to slash a plot of land means to cut down all the trees, to make it ready for construction or farming.

In writing or printing, a slash is an oblique stroke, often used in URLs (web page addresses). For example, if you spelled out the address of the WordReference English only dictionary, www.wordreference.com/definition, you would say, “www dot wordreference dot com slash definition.”

Slashes are also used to mean ‘or.’ So, for example you could write to a friend, “Would you like to go for a coffee/drink/dinner sometime?” which would mean you were suggesting doing one of those things, depending on what your friend might like to do. Slashes can also show that something has more than one function, so a bar/restaurant would be a bar that also serves food.

See full definition
Learn more about slash in our forums

Slash in other languages