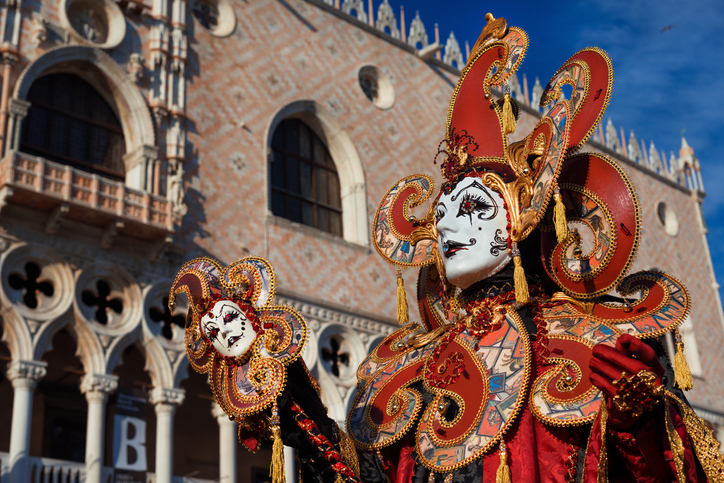 A jest is a witty remark in the form of a joke, sometimes a piece of good-natured ridicule or playful teasing. Jest can also be the object of such teasing. It also means ‘sport or fun.’ As a verb, to jest means ‘to joke’ and ‘to speak or act in fun, rather than seriously.’

A jester, also known as a fool, was an entertainer employed by a monarch or a person of noble birth. They would sing and play music and tell stories and jokes to keep the people of the household entertained. By the 18th century, few households still kept jesters and, in Italy, groups of jesters came together to form traveling bands of players performing plays in the commedia dell’arte form of theater.

From this commedia dell’arte form of theater arose a puppet show, the anglicized version of which is called Punch and Judy, with the character of Punch wearing a jester’s costume. It is still popular in Britain today. You can see a clip from a Punch and Judy show here:

The expression “many a true word is spoken in jest” or “there’s many a true word spoken in jest” means that jokes often contain some element of truth. This saying is very old. In fact, a version of it appears in the Prologue to the Cook’s Tale, which is part of The Canterbury Tales, written by Geoffrey Chaucer between 1387 and 1400 (“Ful ofte in game a sooth I have herd saye” or “Very often I have heard a truth said in jest”).

Jest dates back to the late 13th century. The Middle English noun geste or gest originally meant ‘a narrative of exploits.’ It came into English from the Old French geste (action or exploit), which can be traced back to the Latin noun gesta (deeds) from the verb gerēre (to act, behave, carry or perform). At some point in the late 14th or early 15th century, jest, which was originally a spelling variant of gest, split off. Gest kept the original meaning of ‘famous deed or exploit’ as well as ‘a tale of adventure or great deeds,’ while jest came to mean ‘idle tale’ in the mid-15th century. The sense evolved further, to ‘mocking speech’ and ‘joke’ in the mid-16th century, as well as ‘laughing-stock’ in the late 16th century. The verb dates back to the early 16th century. It can be traced back to the Middle English verb gesten (to recite a tale), which came from the noun, and originally meant ‘to speak in a trifling manner.’ The sense later came to mean, in the mid-16th century, ‘to joke’ or ‘to say or do something to amuse.’

See full definition
Learn more about jest in our forums

Jest in other languages