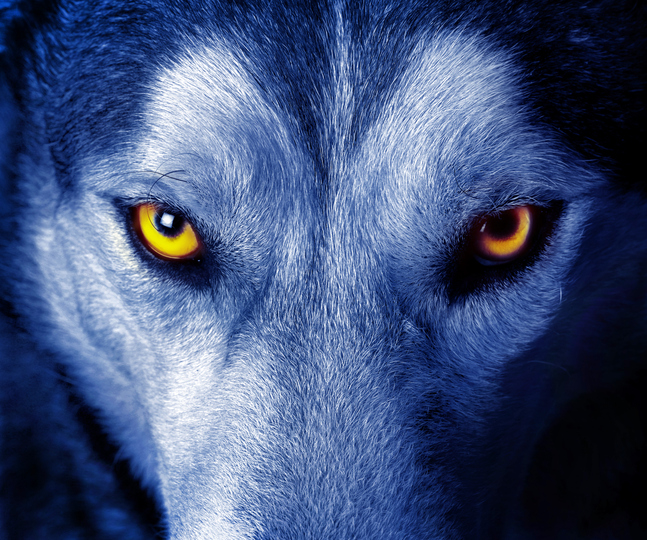 The wolf leers at its prey.

Leer is a verb that means ‘to look with a sideways glance,’ especially one that suggests sexual interest or a sly intention. A lascivious or sly look is of course a leer. Leer is also an unrelated adjective in UK English that means ‘having no burden or load‘ and also ‘fainting due to lack of food,’ although both these meanings are now archaic.

Leer, originally meaning ‘to look sideways at something or someone’ dates back to the early 16th century. The verb came from a now obsolete noun, leer, which meant ‘cheek,’ ‘side of the face’ or ‘profile,’ playing on the idea of looking at someone from the side. It can be traced back, to the Middle English ler or leor and Old English hlēor, and further to the Proto-Germanic hleuza (near the ear), from hleuzo- (ear) and the Proto-Indo-European root kleu– (to hear). It is related to the Sanskrit srnoti (hears), the Middle Persian srod (hearing or sound), the Greek klyo (to hear or be called) and kleos (‘report or rumor,’ as well as ‘fame or glory’), the Latin cluere (to be spoken of), the Old Church Slavonic slusati (to hear) and slovo (word), the Old Irish clunim (I hear) and cluada (ears), the Welsh clywaf (I hear) and clod (praise or fame), the Old High German hlut (sound) and the Gothic hiluþ (listening or attention), as well as English words like loud, listen, list and slave. The implication of lust or malicious intent in the act of leering dates back to the early 18th century. The noun comes from the verb and, meaning ‘a significant glance,’ dates back to the late 16th century. The sense, together with the verb’s sense, had evolved to mean ‘a malicious or lustful glance’ by the 18th century. The adjective leer, which is now rarely used, but you may find in older books, means ’empty of load,’ and figuratively, ‘to faint due to lack of food.’ It dates back to before the year 1050, in the form of the Old English gelǣr (Middle English lere), and can be traced back to the Proto-Germanic leziz (empty) and the Proto-Indo-European les- (to collect or pick). It is related to the Old English lesan (to gather or collect), the German adjective leer (empty) and noun Leer (emptiness), and the Dutch laar (a clearing in the woods), as well as the English word lease.

See full definition
Learn more about Leer in our forums

Leer in other languages