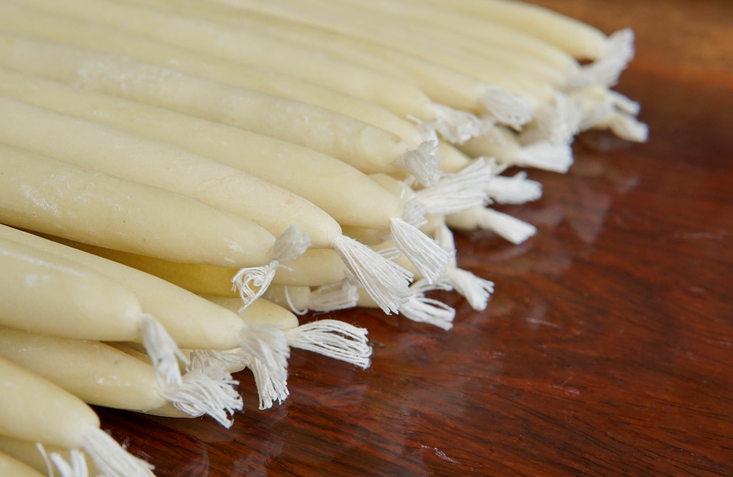 To taper means ‘to become thinner towards the end’ and also ‘to make thinner towards the end’ or ‘to reduce gradually.’ Always followed by off, taper means ‘ to decrease’ or ‘to be reduced by degrees.’ As a noun, a taper is a gradual decrease in width. It is also a very slender candle or a wick for lighting a candle or lamp. Unrelatedly, a taper is also a person who records or edits magnetic tapes.

A taper cut is a haircut where the hair is left longer on top and cut gradually shorter as it comes down the sides and the back of the head. You can see a taper cut being done here:

Taper dates back to before the year 900. The Old English noun tapur or taper (just taper in Middle English) meant ‘wax candle.’ The word is only found in English, and its origin is uncertain, but many linguists believe it evolved from a borrowing of papyrus (some even suggest the word could have been papur or something similar, and possibly meant paper). Papyrus (which was used in Medieval Latin to mean ‘the wick of a candle’ because wicks were often made of papyrus pith), was both a specific type of plant used to make paper and the paper that was made from it in Latin, and can be traced back to the Greek papyros (any of the plants used to make paper), though it is thought to be of Egyptian origin. It is related to the Italian papijo (wick). The meaning evolved into a specific type of thin candle or wick by the 15th century. The sense ‘a gradual decrease in width’ appeared in the early 17th century. Between the 14th and 16th centuries, taper was also an adjective (now obsolete) meaning ‘shaped like a flame or spire.’ The verb, originally meaning ‘to shoot up like a flame or spire’ came from this adjective (and indirectly from the noun). The sense ‘to become slender or decrease in size or force’ was first recorded around the year 1600 (the related noun sense evolved from this sense of the verb), and ‘to make slender’ dates back to the late 17th century. The unrelated noun taper, meaning ‘a person who records or edits tapes,’ is a construction of the noun tape – er, and dates back to the mid-20th century.

See full definition
Learn more about taper in our forums

Taper in other languages