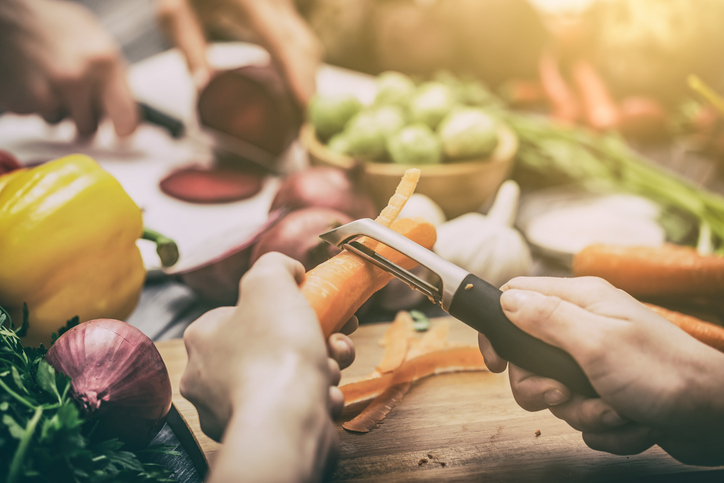 To peel means ‘to take the skin or rind out of something,’ such as vegetables or fruits. If skin or paint comes off on its own, that’s also to peel, and so is ‘to strip something away from something else.’ Figuratively, and usually followed by off, peel can also mean ‘to remove clothing.’ As a noun, peel is the skin or rind of a fruit or vegetable.

peel off: to move away from a group. Example: “One by one, the members of the group peeled off in different directions.”

John Peel was an English disc jockey and radio presenter who worked on BBC Radio 1. He was known for promoting new bands and artists and his enthusiasm for all things related to music made him an iconic figure in British music culture. He presented several radio shows, but the Peel Sessions, where music recorded in the BBC’s own studios was played, were particularly popular. You can read more about John Peel and the Peel Sessions here, and you can listen to Joy Division’s 1979 Peel Session recording of “She’s Lost Control” here:

A peeler is a utensil for peeling vegetables or fruits.

A chemical peel is a cosmetic procedure in which chemicals are applied in order to peel away the uppermost layers of skin, usually on the face, which results in a smoother complexion.

Peel dates back to before the year 1100, in the form of the Old English verb pilian (pelen in Middle English). It originally meant ‘to strip or skin,’ and can be traced back to the Latin pilāre (to remove hair), though it was also probably influenced by the Old French pilier, which also came from the Latin. Pilāre evolved from the noun pilus (hair), and was probably also influenced by the noun pellis (skin or hide). Peel is related to the French poil (hair, fur or bristle), the Italian pelo (hair or fur) and capelli (hair) and the Spanish pelo (hair or fur), among other Romance language equivalents, as well as the English pile (‘downy plumage’ or ‘soft, raised surface on cloth); it is also more distantly related to the Italian pelle, the Spanish piel and the French peau (all meaning skin or hide). The noun, meaning ‘a piece of rind or skin,’ comes from the verb, and dates back to the late 14th century, as the Middle English pill or pile. The expression ‘to keep your eyes peeled’ (to be observant or on the alert) dates back to the mid-19th century, and was first used in American English.

See full definition
Learn more about peel in our forums

Peel in other languages