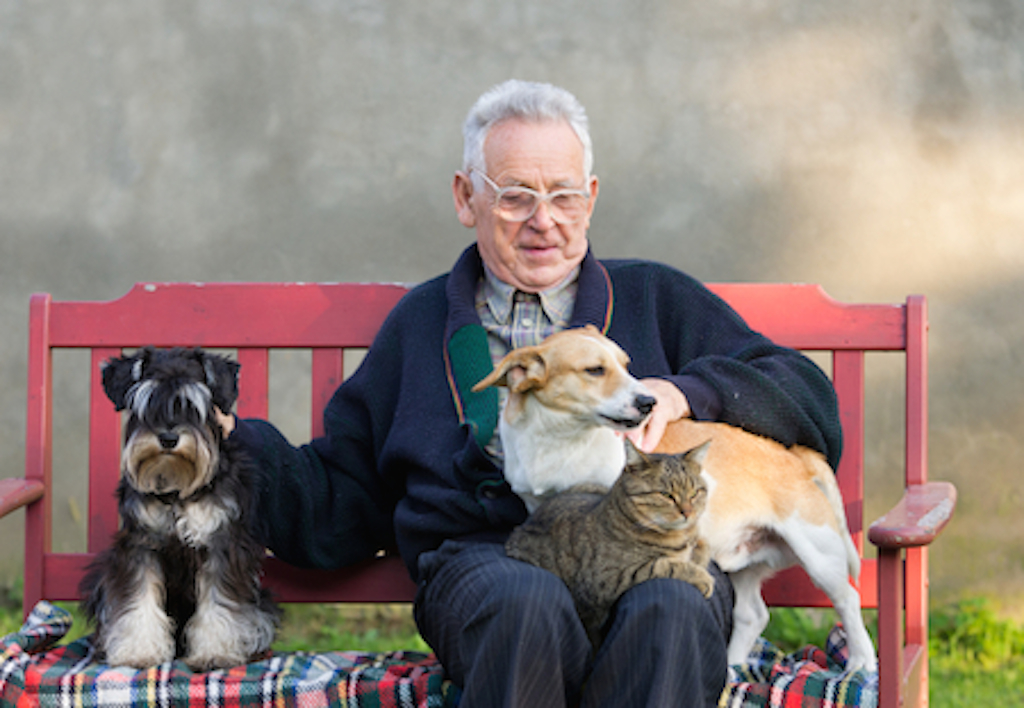 The cat and dog are in the old man's lap.

The most common meaning of lap is the part of the body between the waist and the knees, when someone is sitting. Lap can also be the part of clothing that covers that part of the body. But lap also means ‘a complete circle around a race track,’ or ‘a stage in a long trip.’ As a verb, lap means ‘to go at least one lap in front of an opponent when racing.’ Unrelatedly, to lap is also to ‘take liquid into the mouth with the tongue,’ as many animals drink, and can be used figuratively about the movement of waves against the ground or another solid surface.

in someone’s lap: that something is someone’s responsibility. Example: “John couldn’t deal with the problem and dropped it in Mark’s lap.”

fall into someone’s lap: that something happens to someone without an effort. Example: “Jessie was extremely beautiful and men just fell into her lap” or “I was very lucky; almost as soon as I left college, a great job fell into my lap.”

lap up: to receive something eagerly and with much enthusiasm. Example: “The archeology professor loved telling stories of his adventures in the jungle, and his students lapped them up.”

When we say something is “in the lap of the gods,” we mean it is out of our control and its outcome will be decided by fate or chance. For example, you might say, “I did my best at that job interview; whether I get the job or not is in the lap of the gods now.” “Lap of the Gods” is also the title of a song by Queen. You can watch them performing it here:

Lap dates back to before the year 900, as the Old English noun læppa (Middle English lappe), which originally meant ‘the skirt or flap of a garment.’ It can be traced back to the Proto-Germanic lapp-, though the origin before then is uncertain. Lap is related to the Old Frisian lappa, the Old Saxon lappo, the Middle Dutch lappe, the Dutch lap, the Old High German lappa and the German Lappen (all meaning rag or shred), as well as the Old Norse leppr (patch or rag). The sense ‘upper legs of a person when seated’ first appeared around the year 1300, extended from ‘the lower part of a shirt or skirt,’ and the figurative sense ‘place where something is held and loved’ is from the late 14th century. The expression lap of luxury (from this last sense) first appeared in the early 19th century, while in someone’s lap is from the mid-20th century. The verb, meaning ‘to surround something with something else,’ dates back to the early 14th century, and comes from the noun. The sense ‘to lay one part over another, or to cover one part with another’ was first used around the year 1600, and gave way to the figurative sense of ‘passing another competitor on a track’ in the mid-19th century. Another noun came from the verb, meaning ‘something coiled or wrapped up,’ in the mid-17th century. The sense expanded to ‘the part that covers another part up,’ around the year 1800, and from the sports sense of the verb, to ‘a turn around the track’ in the mid-19th century, as well as, figuratively, a part in any race or trip. The unrelated verb lap, meaning ‘to take up liquid with your tongue,’ also dates back to before the year 900, in the form of the Old English verb lapian (Middle English lappen). Lap, in this sense, can be traced back to the Proto-Germanic lapojan and the Proto-Indo-European root lab-, related to licking or smacking lips. Lap is related to the Old High German laffen (to lick), the Old Saxon lepil, Dutch lepel and German Löffel (all meaning ‘spoon’), the Greek laptein (to sip or lick), the Latin lambere (to lick), and modern European words derived from the latter two, such as the Spanish lamer, Italian leccare, Portuguese lamber and French lécher (to lick), the German lecker (delicious), and the English lick, among others. Lap has been used to describe waves on bodies of water since the early 19th century, and to lap something up dates back to the late 19th century.

See full definition
Learn more about lap in our forums

Lap in other languages