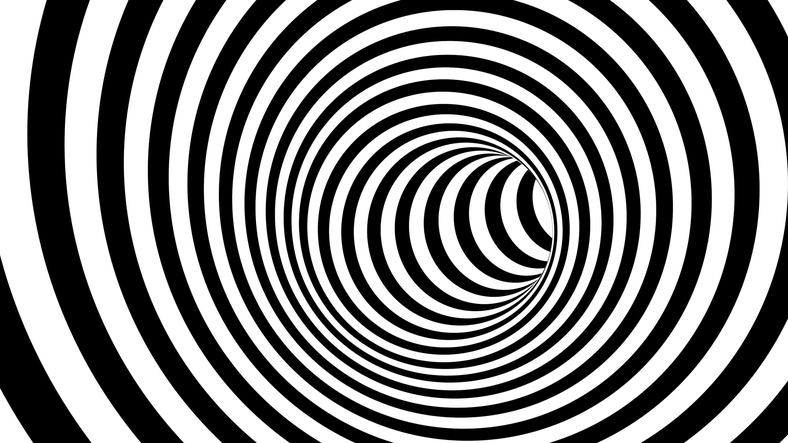 To whirl means ‘to spin quickly, turning around or aside very fast.’ To travel or to be carried along very quickly is also to whirl and, if your head whirls, it means that you’re feeling dizzy. As a noun, a whirl is the act of whirling, a whirling movement, and also a rapid round of events. Informally, whirl can also mean ‘try or attempt.’

A whirl used to be the name for the part of a spindle that looks like a small disc or sphere; its weight is used to maintain or even increase the speed when spinning yarn. These days, it’s called a whorl.

A whirlpool is a place in a river or sea where the water is always moving quickly in a circular motion, spiraling downwards, like the one you can see in this video:

Whirl dates back to the mid-13th century, as the Middle English verb whirlen. Its origin is uncertain, though some linguists think that it can be traced back to the Old English hweorfan (to turn), through a possible (but lost) frequentative verb that researchers have suggested may have been hweorflian. Other linguists think it came into English from the Old Norse hvirfla (to whirl), which is related to the Old English verb. Either way, it can be traced back to the proto-Germanic hwerbana or hwerfana (to turn). Whirl is related to the Dutch wervelen and the German wirbeln (to whirl or swirl), the Danish hvirvle (to whirl), the Swedish virvla and the Albanian vorbull (both meaning ‘a whirl’), as well as the English verb whirr and noun whorl. The noun comes from the verb, and dates back to the early 15th century. The first recorded meaning is ‘a part of the spindle used to provide weight to regulate spinning speed,’ though the word evolved, in that sense, to whorl. The meaning ‘act of whirling’ dates back to the late 15th century, and the figurative sense, ‘confused activity,’ first appeared in the mid-16th century. The colloquial sense ‘a try or attempt’ originated in US slang in the late 19th century.

See full definition
Learn more about whirl in our forums

Whirl in other languages