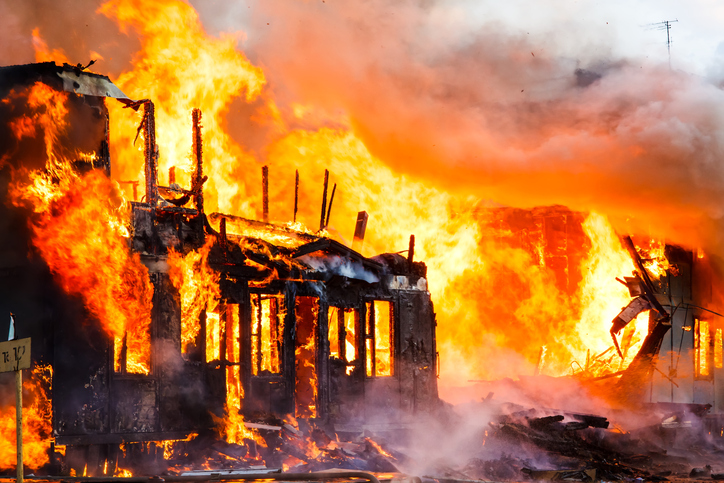 burn down: be completely destroyed by fire. Example: “The old hotel burned down two years ago.”

burn off: disappear due to the warmth of the sun. Example: “Once the morning mist had burned off, it was a beautiful day.”

burn out: to exhaust. Example: “Months of working twelve-hour days had burned Julie out.”

burn your bridges (or: boats): leave no possibility of turning back. Example: “Don’t tell your boss about that new job offer until you’ve decided whether to take it or not; you don’t want to burn your bridges.”

Burning Man is a festival that is held every year in the Black Rock Desert of northwest Nevada in the US. You can read about the festival here, and you can watch a video of it:

Burn is also what the sun does to your skin if you stay out in it too long and it turns your skin red. Example: “Don’t go out without sunscreen on; you’ll burn.”

You may be wondering whether the correct past tense and past participle of burn is burned or burnt. Well, the short answer is that both forms are correct. You might think that burned is correct in US English and burnt is correct in UK English, but in fact, both forms are correct in both versions of English. However, burnt, as the simple past or past participle is very uncommon in US English, so it is probably best to used burned with US speakers. In UK English, both forms are commonly used, so you can choose whichever one you like. In a written text though, it’s best to choose one version and stick to it, for the sake of consistency, rather than switching between the two. As an adjective, both forms are still correct, but burnt is much more common than burned in both US and UK English and it is perfectly acceptable to use burned as the past tense and past participle and burnt as the adjective even within the same piece of writing.

Burn dates back to before the year 900. Old English originally had two verbs, beornan (to burn), which was intransitive, and bærnan (to kindle or burn something), which was transitive. By Middle English, they had both become a single verb that contained both the transitive and intransitive words, influenced by the Old Norse brenna, and had become a single verb (some linguists actually date burn at around the year 1200 because of this), which would be written either brennen or bernen. This single verb could mean ‘to be on fire,’ ‘to be consumed by fire,’ ‘to be ardent,’ ‘to destroy something with fire,’ ‘to roast, broil or toast something by exposing it to fire,’ ‘to burn something when cooking it,’ or ‘to shine, glow or sparkle like fire.’ Burn (both Old English verbs and the Old Norse brenna) can be traced back to the Proto-Germanic brennanan, though its origin before then is uncertain. Burn is related to the Gothic and Old High German brinnan (to be on fire or consumed by fire), and the Middle Dutch bernen, the Dutch branden, the German brennen and the Gothic brannjan (all meaning ‘to set on fire’). Burn has been used figuratively (to describe emotions, passions and even battles) since Old English, but the meaning ‘to be hot or radiate’ dates back to Middle English (13th century), while the sense ‘to produce a burning or stinging sensation’ is from the late 14th century. The colloquial sense ‘to cheat, swindle or victimize’ dates back to the mid-17th century. The noun, meaning ‘the act of burning,’ dates back to before the year 900, in the form of the Old English noun byrne, though the linguists who date the verb to the year 1200 prefer to date the noun to around the year 1300, when the Middle English brenne appeared. Either way, it can be traced back to the same sources as the verb. The spelling remained brenne until the mid-16th century. The sense ‘mark or injury made by burning’ dates back to the early 16th century. The expression ‘burn your bridges behind you’ was first used in writing by Mark Twain in 1892, and thought to have emerged as a reference to the reckless cavalry raids of the American Civil War.

See full definition
Learn more about burn in our forums

Burn in other languages