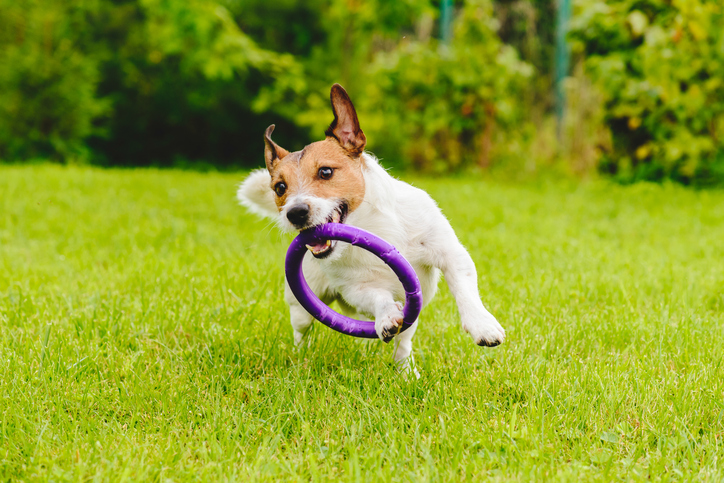 It looks like this little chap is feeling frisky.

To frisk means ‘to skip, dance, or leap in a happy and merry way’ and, these days, it is mainly used about young animals playing, but it may also be used about children. If you frisk someone, it means something completely different, ‘to search someone for concealed weapons, contraband goods, etc., by feeling the person’s clothing.’ As a noun, a frisk can be a lively movement or a search of a person.

Frisk, as a verb meaning ‘to dance or frolic,’ dates back to the early 16th century. It evolved from the late Middle English adjective frisk, meaning ‘lively’ (we use frisky now), which dates back to the mid-15th century. Frisk came into English from the Middle French adjective frisque (lively or brisk), which had a few more senses in Old French (‘merry or animated’ as well as ‘fresh or new’). It probably came into French from a Germanic source, such as the Middle Dutch frisc (fresh). It can be traced back to the Proto-Germanic friskaz, and is related to the Old High German frisc (lively), as well as the Old Frisian fersk, the Middle Dutch versch, the Dutch vers, the Old High German frisc and the German frisch (fresh), the Old Church Slavonic presinu (fresh), the Lithuanian preskas (sweet), the Spanish and Italian fresco (fresh), and the English words fresh and freak. The sense ‘pat down to search for weapons or contraband’ first appeared in the late 18th century. The noun comes from the verb and, meaning ‘a frolic or gambol,’ dates back to the early 16th century. The sense ‘a body search for contraband or weapons’ dates back to the late 18th century.

See full definition
Learn more about frisk in our forums

Frisk in other languages