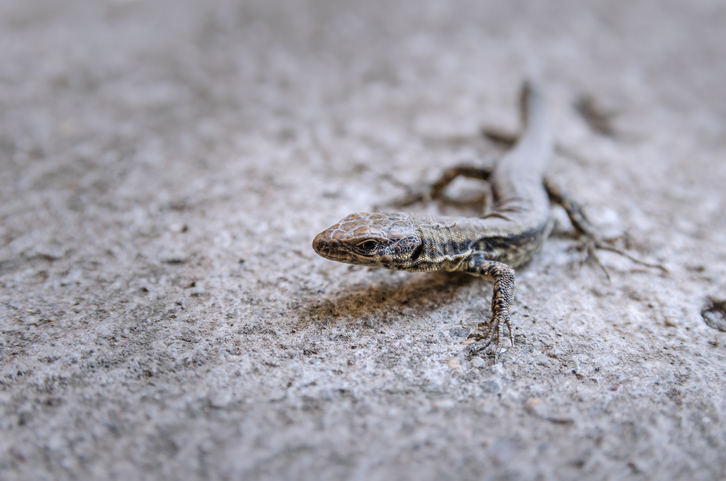 That lizard looks like he's about to skitter off.

Skitter is a way of walking or moving, it specifically means ‘to go, run, or glide lightly or rapidly’ and also ‘to skim along a surface.’ It can also mean ‘to make a scratching or scuttling noise when skittering.’ Skitter is also a technical term in fishing, where it means ‘to draw bait lightly over the surface of water.’

Listen to Ultravox singing “Saturday Night in the City of Dead.” Listen out for the lyric “Tottenham Court Road litter skitters in the wind.”

The adjective skittish means ‘lively, spirited, or restless.’ It is often used about horses, but can be used about other animals or even humans. Despite the similarity in spelling and a certain closeness in meaning, the two words do not apparently share the same origins.

Skitter dates back to the mid-19th century. The verb, meaning ‘to run quickly and lightly,’ is a frequentative of an earlier verb, skite, which as a noun meant ‘a sudden blow’ as well as ‘a contemptible person,’ and was used as a verb, especially in Scotland and Northern England, meaning ‘to move quickly and lightly,’ ‘to slide‘ (especially on ice) and ‘to move suddenly’ (especially in an oblique direction). Its origin is uncertain, but it is thought to be a bivariant of the Old English noun scite (dung), from the Proto-Germanic skitaz and the Proto-Indo-European skeyd– (to split, divide or separate). It is related to the Middle Low German schite, the Low German Scheit, the Old Dutch skita, Middle Dutch schitte and Dutch schijt, the German Scheiße, the Swedish skit, the Norweigan skitt and the Icelandic skitur (all of which mean feces), as well as the English word shit and its Scottish and Northern variant shite. The noun comes from the verb, and also dates back to the mid-19th century. The adjective skittish is actually much older, dating back to the early 15th century. It originally meant ‘very lively’ or ‘frivolous,’ and probably came into English from a Scandinavian source, such as the Old Norse skjota (to shoot, launch or move quickly). It can be traced back to the Proto-Indo-European root skeud– (to shoot, chase or throw), and is related to the Sanskrit skundate (hastens or makes haste), the Old Church Slavonic iskydati (to throw out), the Lithuanian skudrus (quick or nimble), and English words such as scout, sheet, shoot, shout, shut, shuttle and skeet. The sense ‘shy or nervous and apt to run’ dates back to around the year 1500, and was originally used for horses.

See full definition
Learn more about skitter in our forums

Skitter in other languages