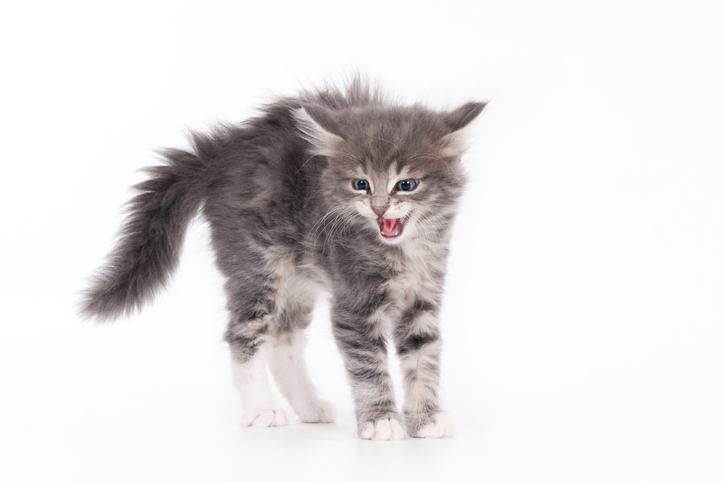 Hiss is what most snakes do, ‘to make or give off a sharp sound like that of the letter s.’ We humans can also hiss, and sometimes when we do, it means we are expressing disapproval or contempt for something or someone by making such a sound. It is also the sound cats make when they are angry or frightened. ‘To silence or drive away by hissing,’ usually followed by an adverb of direction, is also to hiss. As a noun, a hiss is a hissing sound, and a sign of disapproval.

Sir Hiss is the name of one of the characters (a snake) in the Disney animated Robin Hood movie. You can see him in this clip from the movie:

A hissy, or hissy fit, is an informal term for a fit of anger. We use it mostly when someone gets angry about something we consider quite trivial. For example, you could say, “The boss had a total hissy fit when he found someone else’s car in his parking space.” Some people think this expression comes from hysterics (an overly emotional reaction), but it could come from the idea of hissing to express anger. Here, at Word of the Day, we think it may be because of the way cats sometimes overreact to anything that displeases them, like this one, who apparently doesn’t like having her feet tickled.

Hiss, according to most linguists, dates back to the late 14th century, as the Middle English verb hissen, and is related to the Old English hyscan (to jeer at someone or something). A few other linguists see a more direct line between the Old English and Middle English verbs, meaning that to them, hiss dates back to before the year 900, and evolved directly from hyscan. Either way, hiss is of imitative origin, though it is related to similar Germanic words, such as the Old Saxon and Old High German hosc, the Danish hysse and the German zischen. The noun comes from the verb, and was first used in the early 16th century. The related adjective hissy was first used in the early 19th century, and the expression hissy fit dates back to the 1980s.

See full definition
Learn more about hiss in our forums

Hiss in other languages