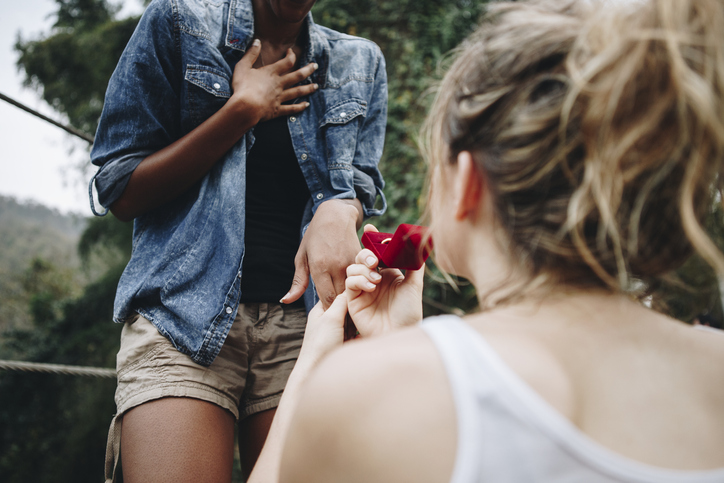 Propose means to suggest or to offer an idea or plan, usually when you need approval from someone else. It may also be used when nominating someone for a position or role. When used without an object, propose means to offer marriage.

Propose is often followed by the preposition to, and means to ask a specific person to marry you. For instance “I proposed to Tina when we were in Venice.”

Watch Mr. Rochester propose to Jane in this 2011 movie adaptation of the classic English novel Jane Eyre by Charlotte Brontë:

When used to mean “suggest,” propose is quite formal and is appropriate for business contexts. In informal speech, native speakers are more likely to use suggest.

Propose, meaning ‘to suggest or offer an idea or plan,’ dates back to the mid-14th century, as the Late Middle English verb proposen. It came into English from the Old French proposer, meaning ‘to propose, advance or suggest.’ It is formed by the prefix pro (forward, forth or to the front) and the verb pose (poser in Old French). Pose (to suggest, suppose, assume, grant or concede), came into English as a verb in its own right around the same time as propose from the Old French poser (to put or place), and can be traced back to the Late Latin pausare (‘to rest, pause or cease,’ or ‘to cause to rest or pause’) and the Latin pausa (pause). Pausare actually took over the sense of an older Latin verb meaning ‘to put or place,’ ponere, due to their similar stems. Propose is related to the French, proposer, the Italian proporre, the Spanish proponer and the Romanian propune, among other Romance language equivalents. It is also related to the English words pose, position and pause, as well as similar words in many other European languages. The sense ‘to make an offer of marriage’ dates back to the mid-18th century.

See full definition
Learn more about propose in our forums

Propose in other languages