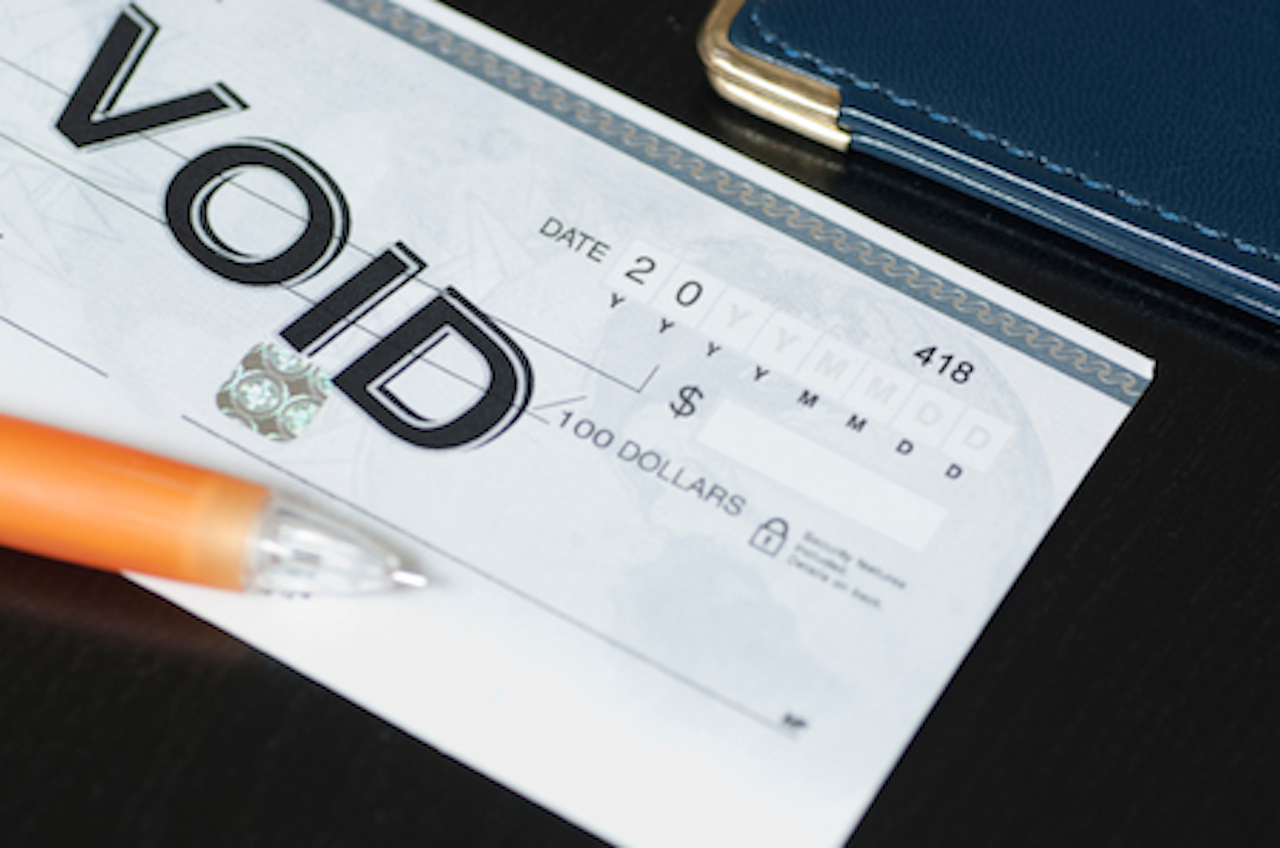 A voided check is invalid.

As a noun, void means ’emptiness,’ both literally and figuratively. To void something means ‘to make it invalid.’ As an adjective, it means that something is invalid. In the sense of bodily functions, void can also mean to go ‘to the bathroom and urinate or defecate.’

null and void (adjective): not legally valid. Example: “You used a false name to sign the contract, so it is null and void.”

Enter the Void is a 2009 movie written and directed by Gaspar Noé. You can see the movie trailer here:

When you make a mistake on a check, you can write “VOID” on it to ensure that no one will be able to cash the check at the bank later. This is called voiding a check.

A similar word to void is vacuum, which also means ’emptiness’ and can be used both literally and figuratively.

Void, meaning ‘unoccupied or vacant,’ dates back to the late 13th century, as the Middle English adjective voide. It came into English from the Anglo-French voide, which can be traced back to the Old French viude, viute or viut (empty, hollow, vast, wide, uncultivated or fallow), from the Vulgar Latin vocitus (empty) and the Latin adjective vocivus (unoccupied, empty or vacant) and verb (to empty), ultimately from the Proto-Indo-European root eue– (to leave or abandon).Void is related to the French vide, the Spanish vacío and the Italian vuoto (all meaning ’empty’), as well as the Sanskrit una– (deficient), the Avestan va– (lack), the Persian vang (empty or poor), the Armenian unain (empty), the Old Norse vanta (to lack), and English words such as avoid, devastate, evacuate, vacant, vacation, vacuum, vain, vanish, vanity, want and waste. The sense ‘lacking or wanting something’ first appeared in the early 15th century, while ‘legally invalid’ was first used in the mid-15th century. The verb, originally the Middle English verb voiden, meaning ‘to clear a place of something,’ also dates back to the late 13th century. It does not come from the adjective, but from the Anglo-French voider, which can be traced back to the Old French vuider (‘to empty or drain something,’ as well as ‘to abandon or evacuate a place’), from the same source as the adjective. The legal sense, ‘to deprive something of legal validity,’ was first recorded in the 14th century. The noun, meaning ‘an unfilled space or gap,’ dates back to the early 17th century, and comes from the adjective. The meaning ‘vacuum or completely empty space’ is from the early 18th century.

See full definition
Learn more about void in our forums

Void in other languages