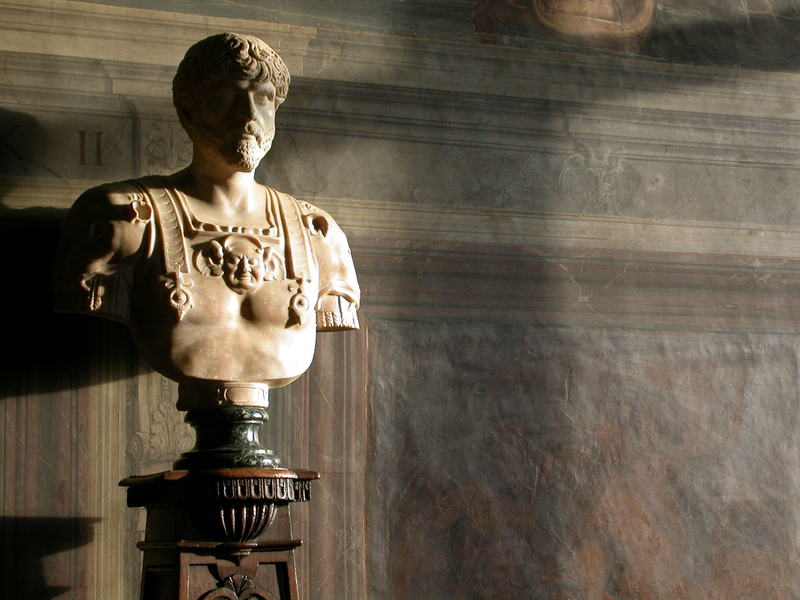 To bust means ‘to hit, burst, or break.’ We also use bust, followed by the preposition up, to mean ‘to damage or destroy’ or to refer to a couple ending their relationship. Informally, it means ‘to arrest someone’ or ‘to enter a house in a police raid.’ As a noun, a bust is a failure, a sudden economic depression, or a police raid. As an adjective, it means ‘bankrupt.’ The past tense and past participle of bust can be either busted or bust.

bust your ass (US, slang, vulgar): work really hard. Example: “I’ve been busting my ass for weeks now trying to get this project finished!”

Bustin’ Down the Door is a documentary film about professional surfing. You can see the trailer here:

Bust also means the bosom, or chest of a woman, and, nowadays it particularly refers to a woman’s breasts. Example: “Lucy has a large bust and has to buy her bras from a specialist store.” We can also use the related adjective busty to describe a woman with a large bust.

Bust, meaning ‘a sculpture of the head and torso,’ dates back to the late 17th century. It came into English from the French buste and the Italian busto. It can be traced back to the Latin bustum (funeral monument or tomb), though linguists are divided on its origin before then. Some think it was shortened from ambustum (burned around), from the verb anburere (to burn around or scorch), from ambi– (around) and urere (to burn). Others think it evolved directly from the Old Latin boro, a precursor to the Latin uro (to burn). The sense we recognize today developed in Italian because of the ancient Etruscan custom of keeping the ashes of a person who died in an urn shaped like their head, which later evolved into Roman bust portraits. The sense ‘the trunk of a human body (above the waist)’ first appeared in the early 18th century, and ‘a woman’s breast or bosom’ developed from this figurative use in the late 19th century. Bust, originally meaning ‘a spree or frolic,’ dates back to the mid-18th century, and was first used in the US colloquially. It emerged as a variant of burst. The sense we use today, ‘a failure or collapse,’ first appeared in the mid-19th century, while ‘police raid or arrest’ is from the 1930s. The verb, meaning ‘a burst,’ is also a variant of burst, and first appeared in the early 19th century (also in the US). The colloquial senses ‘to go bankrupt’ and ‘to break into’ are both from the mid-19th century, while ‘to raid’ is from the 1920s and ‘to arrest’ from the 1950s. Burst is much older. It dates back to before the year 900, as the Old English verb berstan (to break suddenly or shatter due to pressure from inside). It can be traced back to the Proto-Germanic root brest– and is related to the Old Saxon brestan, the Old Frisian bersta, the Middle Dutch berstan, the Low German barsten, the Dutch barsten, the Old High German brestan and the German bersten (all meaning ‘to burst’).

See full definition
Learn more about bust in our forums

Bust in other languages