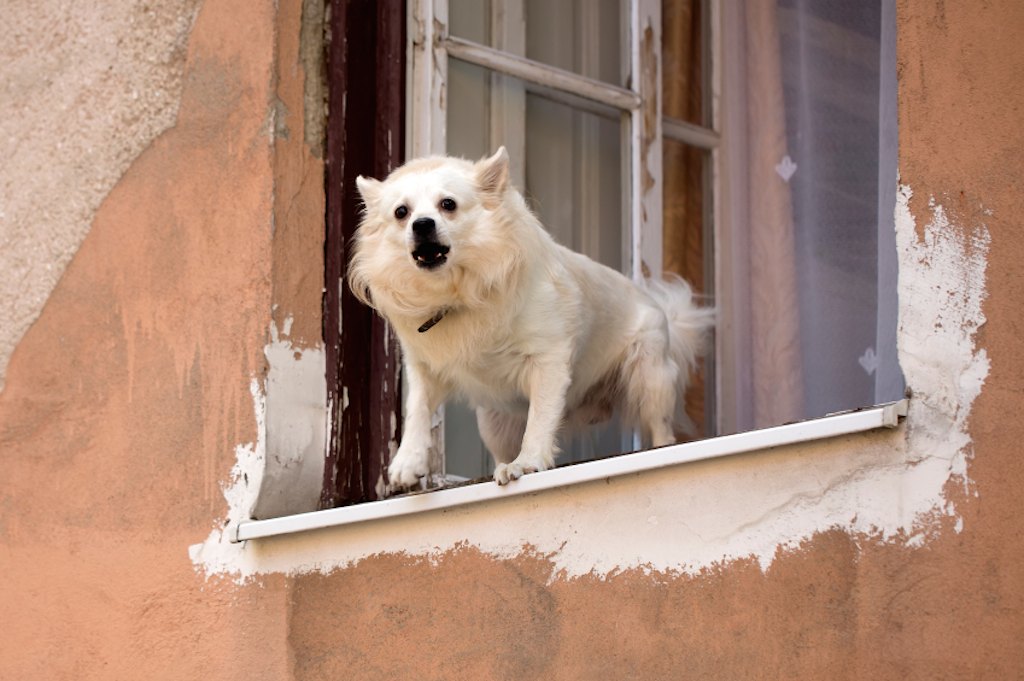 Sometimes dogs bark to warn strangers away from their territory.

A bark is the sharp sound made by a dog, wolf, or fox and, by extension, any sharp sound similar to this, especially when someone is coughing or laughing. It is also used to describe the sound of a gun explosion and, figuratively, a bark is something said rudely, especially an order. As a verb and in reference to dogs or guns, to bark means ‘to make a barking sound,’ and also ‘to say something rudely or harshly.’

their bark is worse than their bite: said of someone who seems harsh on the surface, but is not as bad as you think. Example: “Don’t worry if the boss shouts at you; his bark is worse than his bite. He won’t actually fire you for such a small mistake.”

bark at the moon: protest about something without having any effect. Example: “You can complain about the new highway all you like, but it won’t make any difference; you’re just barking at the moon.”

In botanics, bark is the outside covering of a tree and, as a verb, to bark something means to ‘to rub off or scrape the skin off something, as by bumping into something.’ So, for example, if you walk into a low table and graze your knees, you can say that you barked your knees on the coffee table.

Although bark is the term for all the short, sharp sounds dogs make, we also use a more specific term for the high-pitched barks made by some small dogs. For that we say they “yap” or sometimes “yip.” Both these words can also be used as nouns.

Bark, meaning ‘to utter a sharp, sudden sound’ (especially dogs), dates back to before the year 900, as the Old English verb beorcan (Middle English berken), meaning ‘to bark.’ It can be traced back to the Proto-Germanic berkan. The origin before then is echoic. Bark is related to the Old Norse berkja (‘to bark’ as well as ‘to bluster’), the Lithuanian burgė́ti, (‘to growl’ or ‘to quarrel’), and the Serbo-Croatian br̀gljati (to murmur). The expression bark at the moon appeared in the mid-17th century, while bark up the wrong tree was first used in the US in the early 19th century. The noun, meaning ‘the sound a dog makes,’ also dates back to before the year 900, as the Old English beorc, and comes from the verb. The expression ‘their bark is worse than their bite‘ has been used in English since the mid-17th century, but the proverb, in different forms, is much older, and exists in other languages, including Latin. Bark, meaning the outer layer on tree trunks, dates back to around the year 1300, and is unrelated. It came into English from a Scandinavian source, such as the Old Norse bôkr (bark), and can be traced back to the Proto-Germanic barkuz. Bark is related to the Low German borke, the Middle Dutch berke, the Dutch berk, the Old High German birihha and the German Birke (birch, a type of tree), as well as the English birch. The verb, meaning ‘to strip the bark off a tree,’ dates back to the mid-16th century, and comes from the noun. The sense expanded to include ‘to scrape or rub off skin’ in the mid-19th century.

See full definition
Learn more about bark in our forums

Bark in other languages