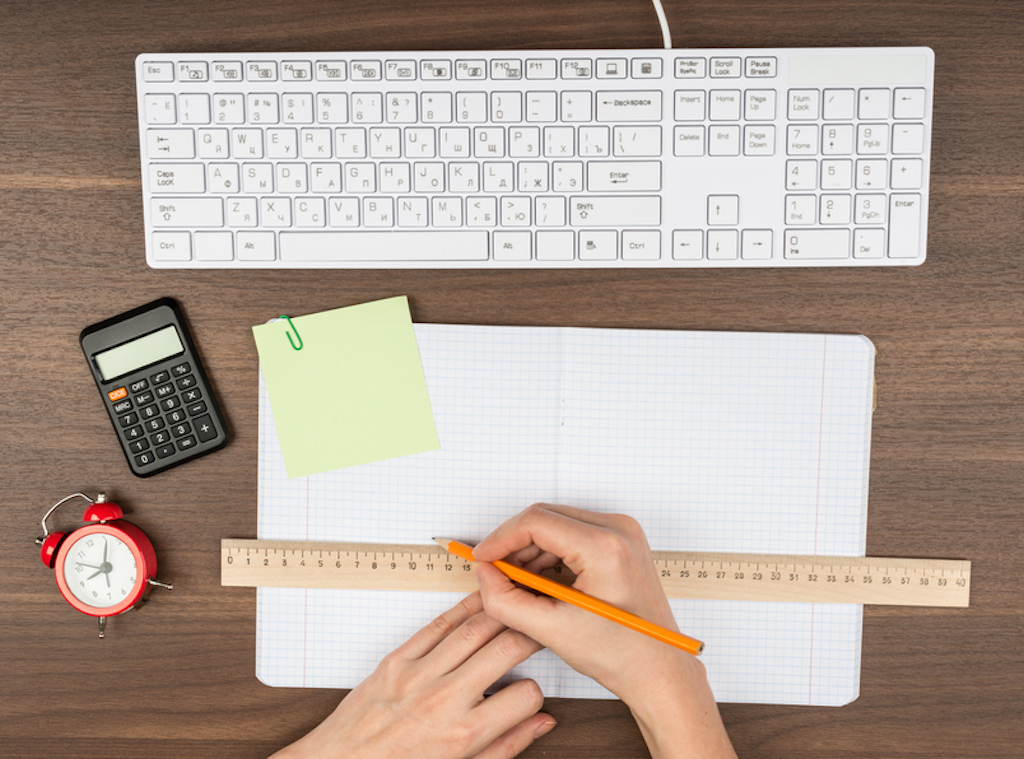 You can use a ruler to help you rule lines on a piece of paper.

A rule is a principle that says how things are to be done and how people are to behave, and it is also a normal practice or way something is. Rule also means ‘control’ or ‘domination’ and is also the code of regulations for a religious community. As a verb, rule means ‘to control or use power over something or someone,’ ‘to declare with authority,’ and ‘to be prevalent’. It also means ‘to mark (a paper) with lines.’

as a rule: generally, usually. Example: “As a rule, I get up early and go for a run before work.”

rule out: dismiss something completely. Example: “The workforce wanted to reorganize their working hours into a four-day week, but management ruled it out.”

rule the roost: be in charge or dominant. Example: “In our house, it’s definitely my mother who rules the roost.”

The Cider House Rules is the title of a 1999 movie. You can see the trailer for it here:

Informally, rule can also be used without an object to mean that something is the best. Example: “When it comes to online dictionaries, WordReference rules!”

Rule, meaning ‘principle governing conduct,’ as well as ‘formula with which conduct must comply,’ dates back to around the year 1200, in the form of the Middle English noun riule or reule. It came into English from the Old French riule and the Norman reule (rule, custom or order), which can be traced back to the Vulgar Latin and Latin rēgula (‘a straight stick, bar or ruler,’ and figuratively, ‘a pattern or model’), related to the verb rēgulāre (to rule, straighten or guide), and the Proto-Indo-European root reg– (‘to move in a straight line,’ and figuratively ‘to lead or rule’). Rule is related to the French règle, the Spanish regla, the Italian regola and the Portuguese regra (all meaning rule), as well as the Sanskrit raj– (a king or leader), the Persian rahst (right or correct), the Latin rex (king) and rectus (right, correct), the Greek oregein (to reach or extend), the Old Irish ri and Gaelic righ (a king), the Gothic reiks (leader) and raihts (straight or right), the Lithuanian raižytis (to stretch yourself), the Old English rice (kingdom), –ric (king) and riht (correct), and many English words, including address, alert, arrogant, correct, direct, dress, interrogate, rack, rail, rake, rank, real, reckless, rectangle, regular, rich, right and surge. The sense ‘a strip used for measuring or making lines’ dates back to the 14th century, while ‘regulation for gameplay’ first appeared in the late 17th century. The verb, meaning ‘to control, guide or direct,’ also dates back to around the year 1200, as the Middle English verb riwlen, reulen or rewellen. It came into English from the Old French riuler (to impose or rule), from the same Latin source as the noun. The legal sense ‘to establish by decision’ was first used in the early 15th century, while ‘to mark with lines is from the late 16th century. The sense ‘to dominate or prevail’ first appeared in the mid-19th century.

See full definition
Learn more about rule in our forums

Rule in other languages