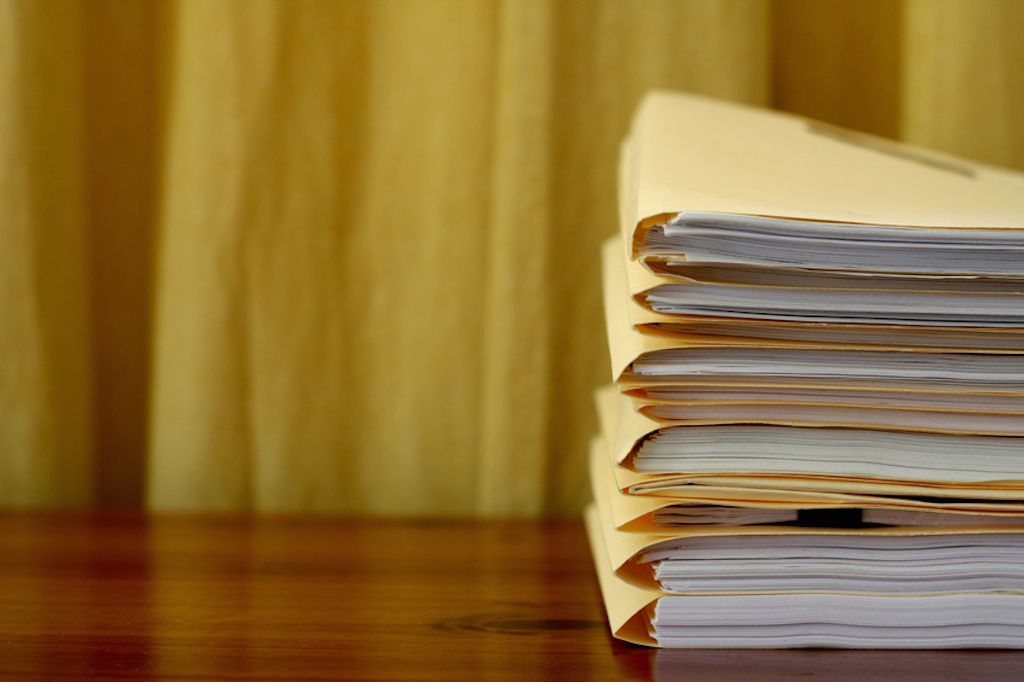 A stack of files

In computing, a file is a collection of information, such as a word processing document or spreadsheet, stored under a particular name. A file is also a collection of papers, usually stored in a folder, and it is also the folder or a case where documents are kept for future reference. A file is also a line of things or people, one behind the other. As a verb, file means ‘to put in a cabinet or folder’ or ‘to arrange papers or other records in a certain order for future reference.’ When talking about a legal process, file means ‘to start’ or ‘to submit’ something, such as a formal request, application, or complaint. In journalism, it means ‘to send a news story to a newspaper or agency.’ Lastly, to file means ‘to march in a line.’

on file: in a file or recorded in some way for future reference. Example: “I’m sorry, we don’t have any vacancies at the moment, but we will keep your details on file so that we can contact you if a job becomes available.”

A file is also a metal tool used for smoothing wooden or metal surfaces and, by extension, a nail file is a tool used to smooth and shape your nails. As a verb, it means ‘to smooth using a file.’

File is also an archaic slang word meaning ‘to pick somebody’s pocket,’ also sometimes used in the expression file a cly, meaning the same thing. You won’t hear these expressions now, but you might read them in some very old books.

File, meaning ‘to organize documents or information,’ dates back to the mid-15th century. It came into English from the Middle French verb filer (‘to spin thread,’ or ‘to string documents up on a thread or wire‘), from the noun fil (thread or filament). It can be traced back to the Latin filum (thread or filament), and was also influenced by the Latin verb fīlāre (to string or thread something together); the origin of both of these is be found in the Proto-Indo-European root gwhi– (thread or tendon). File is related to the French fil, Italian filo, Portuguese fio and Spanish hilo, all meaning ‘strong or thread,’ as well as the Avestan jya– (bowstring), the Armenian jil (sinew, string or line), the Lithuanian gysla (vein or sinew), the Old Church Slavonic zila (vein) and English words such as defile, filament, filigree, fillet and profile. As the methods for storing records and information changed, so did the meaning of file. By the early 16th century, it was more general: ‘to place among the records of a court or office,’ and the legal sense, ‘to submit something or start a process,’ emerged around the same time. The sense ‘to walk in a single line’ was originally figurative, and dates back to the early 17th century. The journalism meaning, ‘to send a story to a newspaper or agency,’ was first used in the 1950s. The noun dates back to the early 16th century. It originally meant ‘the string or wire that documents were kept on,’ and came into English from the French file (a row), which evolved from the Middle French verb filer (the same one that gave us the verb in English). This original meaning explains why we still say that information and records are kept on file rather than in file. Like the verb, the sense evolved with the storage method, so that it came to mean ‘a collection of systematically arranged papers or documents’ by the early 17th century, and the computer sense appeared in the 1950s. The sense ‘a row of people walking or marching in a single line,’ first appeared in the late 16th century, in military contexts, and comes from similar use of the French verb filer (the English verb file acquired this meaning a bit later). The unrelated noun file, ‘a tool used to smooth surfaces,’ is much older. It dates back to before the year 900, as the Old English noun fēol, fēl or fīil. It can be traced back to the Proto-Germanic fihalo (cutting tool), from the Proto-Indo-European root peig– (to cut or mark by incision). File is related to the Old Saxon fila, the Old High German fila, the Middle Dutch vile, the Dutch vijl and the German Feile (all meaning ‘file’), as well as the Sanskrit pimsati (to carve, cut to measure or adorn), the Greek pikros (bitter, sharp, pointed, piercing or painful) and poikilos (spotted, pied or various), the Latin pingere (to embroider, tattoo, paint or picture), the Old Church Slavonic pila (file or saw) and pisati (to write), the Lithuanian piela (file) and piešiu or piešti (to write), and English words such as depict, paint, picture, pigment, pint and pinto. The verb, meaning ‘to smooth with a file,’ also dates back to before the year 900, as the Old English verb filian (Middle English filen), and comes from the same source as the noun.

See full definition
Learn more about file in our forums

File in other languages