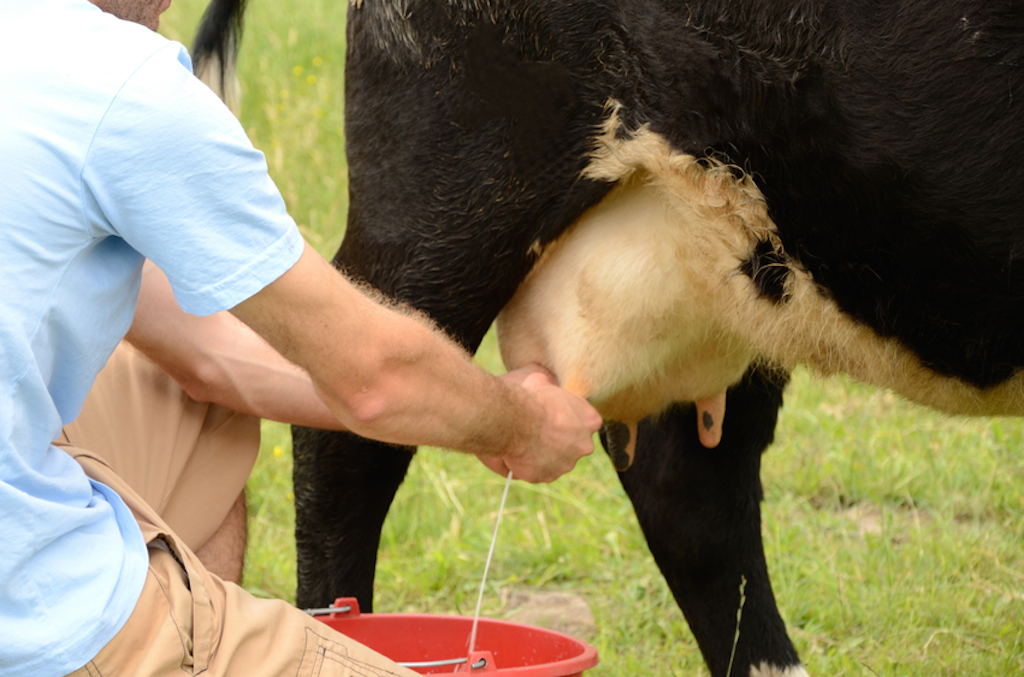 We think you probably know that milk is a white liquid that all mammals produce to feed their babies, and also the liquid produced by cows or other animals that we humans use as food or to make dairy products. It is also an edible liquid that looks like milk, like those made of coconut or soybeans. As a verb, to milk means ‘to extract milk from udders’ (the part of the cow shown in the picture above), and also ‘to extract something as if by milking.’ To milk also means ‘to exploit a situation’ or ‘to obtain something from someone,’ especially in gradual amounts, or ‘to extract.’

milk and honey: plenty, comfort, abundance (a reference to the Biblical description of the promised land). Example: “Unfortunately, life can’t all be milk and honey. Everyone has to face some hardships.”

Harvey Milk was a gay rights activist and politician in 1970s San Francisco. He was California’s first openly gay elected official. A movie about his life, titled Milk, came out in 2009. You can see the movie trailer here:

The first set of teeth that children grow, which later fall out to give way to their adult teeth, are called milk teeth or baby teeth.

Milk dates back to before the year 900, in the form of the Old English noun meoluc or milc (Middle English milk), meaning ‘the white fluid produced by mammals to feed their young.’ It can be traced back to the Proto-Germanic meluk– (milk), from melk– (to milk), and the Proto-Indo-European root melg– (‘to wipe or rub off,’ as well as ‘to stroke’ or ‘to milk’). Milk is related to the Old Norse mjolk, the Old Frisian melok, the Old Saxon miluk, the Dutch melk, the Old High German miluh, the German Milch, the Gothic miluks, the Old Church Slavonic meleko, the Russian moloko and the Czech mleko (all meaning ‘milk’), as well as the Sanskrit marjati (wipes off), the Greek amelgein, Latin mulgere, Old Church Slavonic mlesti and Lithuanian melžti (to milk), and the Old Irish melg (milk), and the English words emulsify, emulsion and milch. White plant juices or saps have been called milk since around the year 1200. The expression ‘milk of human kindness’ was first used in the early 17th century by William Shakespeare (in Macbeth), while ‘to cry over spilled milk’ dates back to the 1830s, and was first used by a Canadian author called Thomas C. Haliburton. The verb, meaning ‘to draw milk from breasts or udders’ or ‘to give milk or suckle,’ also dates back to before the year 900 as the Old English melcan, milcian or meolcian. Like the noun, it can be traced back to the Proto-Germanic melk– (to milk) and the PIE root melg-. The figurative sense ‘to exploit for profit’ was first used in the early 16th century, while ‘to obtain something from someone in gradual amounts’ or ‘to extract’ evolved from the prior sense in the 18th century.

See full definition
Learn more about milk in our forums

Milk in other languages