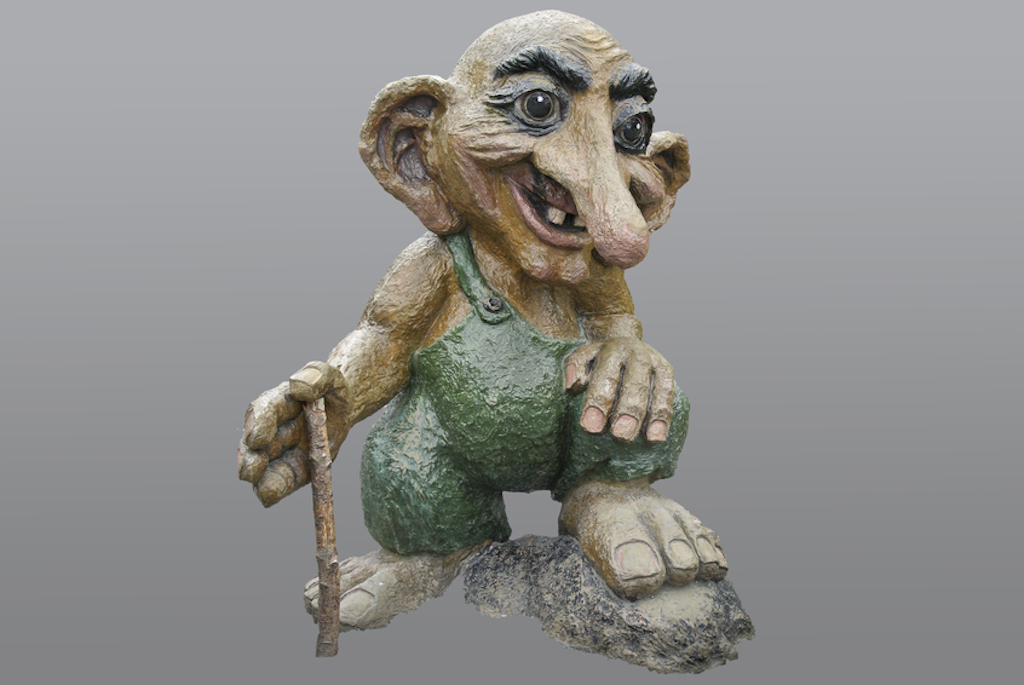 A statue of a troll

Most commonly, a troll is a supernatural creature from folklore and fairy tales, who is usually mean to humans and lives in a cave or underground. Troll is also an impolite way to say ‘ugly.’ But troll is also a verb that means ‘to sing in a rolling voice’, and also ‘to fish by trailing a line behind a slow-moving boat.’ As a noun, a troll is a song and also the lure and line used in fishing. However, some of these meanings are not heard that often these days, and troll has developed yet another, more common meaning: as a verb it means ‘to post something online just to make someone upset’ and, as a noun, a troll is a person who posts such things.

In the UK, to troll is an informal synonym for stroll, which means ‘a leisurely, relaxing walk.’ Example: “We like to troll along the river after dinner.”

Watch the trailer for the DreamWorks movie Trolls here:

A lot of people think that the modern computing sense of troll comes from the folklore sense, because trolls are supposed to be unpleasant creatures. However, it actually comes from the fishing sense. Trolls post nasty messages online in an attempt to draw other people into an argument with them––a bit like trying to get the fish to take the bait (bait is something like a worm at the end of a fishing line that is used to attract the fish).

Troll, originally meaning ‘to wander about or stroll,’ dates back to the late 14th century, as the Middle English verb trollen. It may have come into English from the Old French troller (to wander about or go in quest of game without a purpose), from a Germanic source, or directly from a Germanic source, such as the Middle High German trollen (to walk or run with short steps). It can be traced back to the Proto-Germanic truzlanan, though its origin before then is unknown. Troll is related to the French trôler, and of course the English stroll. The original sense is now only used informally in the UK, but the sense ‘to sing in the manner of a catch or round’ and later ‘to sing in a full voice,’ which first appeared in the mid-16th century, evolved from a figurative use of the meaning. ‘To fish with a moving line,’ which dates back to around the year 1600, also evolved from the original sense, but the way it did is not well understood. Some linguists think it came about from a confusion with the verb trawl (with the same fishing meaning) or even trail (to drag something behind). This sense has also been used figuratively (to entice, allure, or lure as if with a moving bait) since it first appeared. The noun meaning ‘the act of going round or repetition’ dates back to the early 18th century, and comes from the verb. The most common meaning of troll, a supernatural being in folklore and fairy tales, first appeared in the early 16th century. It came into English (most likely through fairy tales) from the Old Norse troll (a giant not from the human race, or an evil spirit or monster). Some linguists have suggested that it evolved from the idea of walking clumsily, and can therefore be traced back to the same Proto-Germanic sense as the verb, but there is not much evidence to support this; on the other hand, there are other Scandinavian words referring to magic or the supernatural that seem more closely related, such as the Old Norse trolldomr (witchcraft) and the Swedish trolla (to charm or bewitch), which make a different (unknown) origin more likely. The Internet sense appeared in the late 1980s (the verb) and the early 1990s (the noun). Most linguists agree that it came from the verb sense ‘to fish with a moving line,’ but some have also suggested that the fairytale sense of the noun created a relation in speakers’ minds, and at the very least, made the word more popular.

See full definition
Learn more about troll in our forums

Troll in other languages