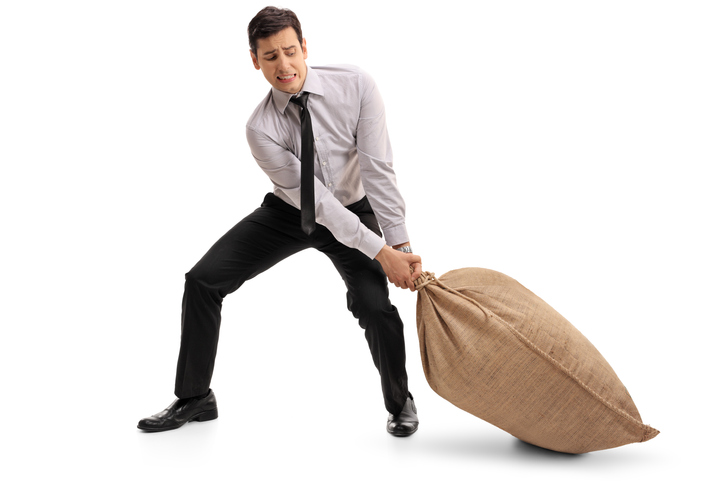 To drag something is to pull it with difficulty and effort and, figuratively, to drag someone means ‘to take them somewhere they don’t want to go.’ In computers, drag means ‘to move an image by first clicking on it with the mouse.’ Drag also means ‘to last for too long and be boring’ (in this sense it is sometimes used with on). In informal conversation a drag is something or someone boring. It is also a single puff on a cigarette.

drag and drop (computer): to move an image or text holding it with the mouse, then to let it go in a particular place. “To move a file on your computer, drag and drop it into a different folder.”

drag your feet (figurative): to delay or not be willing to do something. “You know you have to tell the boss what you did sometime, so stop dragging your feet and get on with it!”

in drag: wearing clothes normally worn by the opposite sex, usually when a man is wearing women’s clothes. “John went to the party in drag and everyone thought he looked fabulous.”

drag show: entertainment given by a man or men in drag. “The drag show featured singers and dancers.”

RuPaul’s Drag Race is a reality TV show in which drag queens compete to become the next drag superstar. You can see the trailer for one of its spin-off shows, RuPaul’s All Stars Drag Race, here:

Drag dates back to the late 14th century, in the form of the Middle English verb draggen, which originally meant ‘to draw a grapnel across the bottom of a river or lake to find something.’ According to some linguists, it came into English from the Old Norse draga (to draw or attract), which in turn came from the Old English verb dragan (to draw). Other linguists believe that it evolved directly from the Old English verb, influenced by the Old Norse. Either way, it can be traced back to the Proto-Germanic draganan (to draw or pull), probably from the Proto-Indo-European root dhregh– (to draw or drag on the ground). Drag is related to the Low German dragge (a drag-anchor or grapnel), the Danish drægge (to dredge) and drage (to draw or attract), the Swedish dragga (to drag, drag anchor or sweep) and draga (to draw or go), and the Icelandic draga (to drag, or pull), as well as the Sanskrit dhrajati (pulls, slides in) and the Russian drogi (wagon) and doroga (way), as well as the English words draw, drug, drudge, dredge and draught. Drag may also be related to the Latin trahere (to draw), though this is disputed. If this were the case, drag would also be related to the English words tract, track, trace and attract. The sense ‘to pull, haul or draw away by force’ appeared in the early 15th century, while ‘to draw along slowly’ (usually said of a person’s feet or an animal’s paws or tails) in the late 16th century, and expanded to include ‘to move heavily or slowly’ by the mid-17th century. The figurative sense, ‘to be boring or last too long’ was first used in the 20th century. The noun, originally meaning ‘a dragnet,’ dates back to around the year 1300, so it is a bit older than the verb. It probably came into English from a Scandianavian source, such as the Old Norse dragga (a load) or the Swedish dragg (grapnel), from the same origin as the verb. The sense ‘something attached to a moving body that makes it slower’ is from the early 18th century, while ‘an annoying or boring person’ is from the early 19th century. A drag has been used to describe a puff on a cigarette since the early 20th century. Drag, meaning ‘women’s clothing worn by a man,’ first appeared in the mid-19th century, though its origin is uncertain. Some linguists think it originated in theater slang (women’s long skirts drag across the floor), while others think it may have come from the Yiddish trogn (to wear), from the German tragen (to wear). The term drag queen was first used in the 1940s, but drag king is only recorded since the 1980s.

See full definition
Learn more about drag in our forums

Drag in other languages