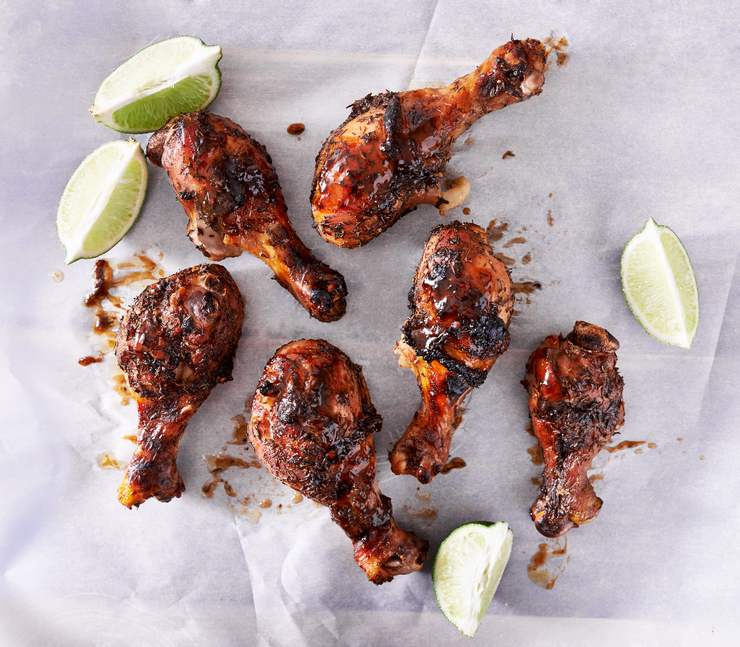 A jerk is any sudden movement like a twist, a pull, or a push. It’s also an involuntary and sudden muscle movement. Colloquially, and mainly in the US, we call someone who is inconsiderate a jerk. As a verb, to jerk means ‘to pull, twist, or push’ with a sudden movement and also ‘to make an uncontrollable sharp movement.’ To jerk also means ‘to preserve meat by cutting it into strips and curing by drying in the sun.’

Jerk is a dance in which the dancers alternately thrust out their pelvises and their shoulders. It comes from the twist but it’s now associated with hip hop. The verb to jerk means to dance in this way.

Jerk is also the name of a type of seasoning used in Jamaican cooking or a style of cooking using this seasoning. Meat is rubbed with or marinated in the spice mix before cooking. Traditionally, jerk seasoning was used on chicken and pork, but these days you can find seafood, vegetables, and even tofu cooked this way too.

Jerk first appeared in English in the mid-16th century as a verb, meaning ‘to lash or strike, as with a whip.’ A few decades later, the meaning widened to ‘pull sharply or suddenly.’  The noun for this meaning closely followed the verb. The verb meaning related to involuntary body movements dates to around the year 1600, but the noun for the same meaning was not used until the early 19th century. The dance mentioned above appeared in the 1960s, and is derived from this sense. The origin of the word is not known, but it may come from yerk, meaning ‘to draw stitches tight’ (shoemaker’s term), thus making the shoe ready to wear, from the Middle English yerkid, an adjective meaning ‘pulled tight’ (early 15th century), or the Middle English verb ferken ‘to move hastily or drive something forward,’ and these may come from the Old English verbs fercian ‘to proceed,’ or gearcian, ‘to prepare, make ready.’ Finally, the sense used to describe a person appeared in the 1930s in America, and probably originated in carnival slang, but its origin beyond that is a mystery.

See full definition
Learn more about jerk in our forums

Jerk in other languages