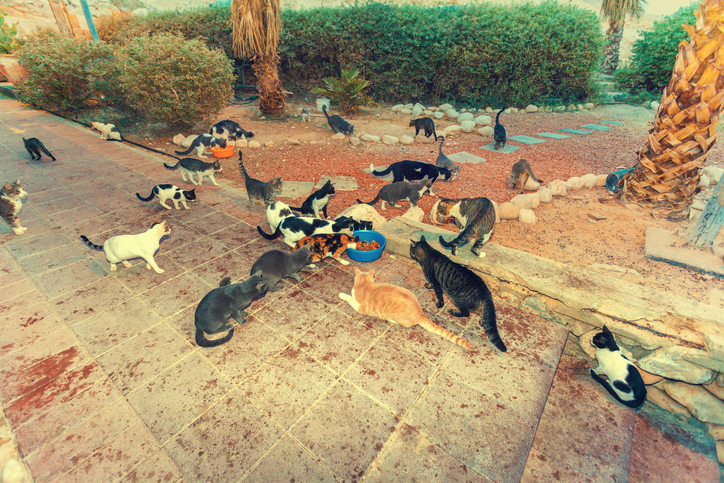 To stray means ‘to wander,’ ‘to move away from the proper course,’ and also ‘to become distracted and digress.’ As a noun, a stray is a domestic animal, such as a dog or cat, found wandering and without an owner. Figuratively, a homeless or friendless person can also be called a stray (although this is most often in the plural expression “waifs and strays”). As an adjective, stray refers to something or someone straying or having strayed. Something occurring apart from other things is also referred as stray.

You can listen to band The Stray Cats singing their 1981 single “Stray Cat Strut” and watch the video here:

Strays, always in the plural, are incidences of electrical interference, such as static on a radio or on a telephone line.

Sadly, all too many animals end up as strays or being given to shelters, because people don’t think about all the responsibility that owning an animal brings with it. Here is a video from a charity called The Dog’s Trust made as part of a Christmas campaign to remind people to think before giving dogs as presents:

Informally, to stray can mean ‘to be unfaithful to your partner.’

Stray dates back to the late 13th century. The Middle English verb strayen, a variant of astraien or estraien, comes from the Old and Middle French estraier, which meant ‘to wander about, roam, drift or run loose,’ and was usually said of animals, especially rider-less horses. Linguists are unsure about the origin. Some think that it comes from the Vulgar Latin estragare, a contraction of estravagare, from the Latin extra vagari, ‘to wander outside’ (this would make it related to the English adjective extravagant). Others trace it back to Latin a different way: with the meaning ‘go about the streets’ literally evolving from estree (street or highway), which in turn comes from the Latin via strata, or ‘paved road’ (also the origin of the English street). The figurative sense, ‘to wander from the moral path,’ dates back to the 14th century. The noun also dates back to the late 13th century. It comes from the verb, but this separation probably occurred in French, so it was the Anglo French noun estraié that became the noun-form of stray in English. Stray has been used as an adjective, mainly of animals, since around the year 1600, and of people or objects since around the year 1900. The adjective comes from the verb, but through a shortening of the adverb astray.

See full definition
Learn more about stray in our forums

Stray in other languages