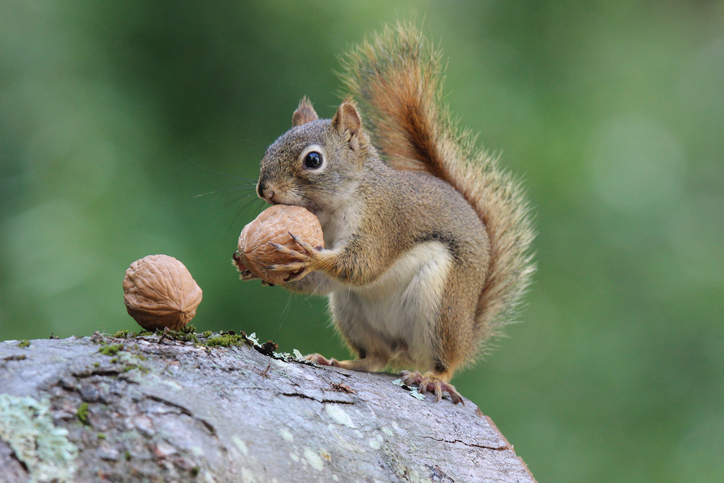 Squirrels are known for being nuts about nuts.

A nut is a dry fruit consisting of an edible kernel, enclosed in a woody shell. The kernel itself is also called a nut. A nut is also a metal block with a threaded hole allowing it to be screwed down on a bolt to hold the objects the bolt passes through together. Colloquially, if you say someone is a nut, preceded by a noun, it means that he or she is really enthusiastic about that thing. As a slang term, you call someone foolish or crazy a nut. In UK English, informally, nut is used as a verb, meaning ‘to headbutt (to strike with the head) someone.’

off your nut: crazy. Example: “You want to quit your well-paid job to write a novel, when you’ve never written anything other than a shopping list before? You must be off your nut!”

drive someone nuts: irritate or frustrate someone. Example: “The neighbors’ dog keeps yapping and it’s driving me nuts!”

go nuts: go wild, go crazy. Example: “You’ve been working hard lately, why don’t you have a night out with your friends; go a little nuts for a change?”

Of course, the world would be quite a boring place if people weren’t at least a little nutty at times. That’s the subject of this song by Johnny Cash; it’s called “Everybody Loves a Nut”:

The related adjective nuts means ‘crazy’ or ‘very enthusiastic about something.’

As a vulgar slang term, usually in the plural, nuts are testicles.

You can also use the term nutcase to refer to someone who is crazy or, in UK English, you can also say nutter.

Nut dates back to before the year 900. The Old English hnutu (pronounced with a very soft h), meant ‘hard seed’ (especially one that was edible), and can be traced back to the Proto-Germanic root hnut– and the Proto-Indo-European root kneu– (nut). It is related to the Old Norse hnot, the Dutch noot, the Old High German hnuz, the German Nuss, the Latin nux, the French noix and the Spanish nuez (among others), all meaning ‘nut,’ as well as a few other words with related, figurative meanings, such as nucleus. The metallic piece used to fasten a bolt has been called a nut since the early 17th century, and nuts has been used as slang for testicles since the early 20th century. The slang use of nut to mean ‘head’ first appeared in the mid-19th century, and gave rise to the adjective nuts, meaning ‘crazy,’ as well as the noun sense of ‘crazy person,’ in the early 20th century, and the UK verb meaning ‘to headbutt someone.’ Nutter, in UK English, appeared in the 17th century, but meant ‘person who gathers nuts.’ Its slang meaning dates back to the mid-20th century.

See full definition
Learn more about nut in our forums

Nut in other languages