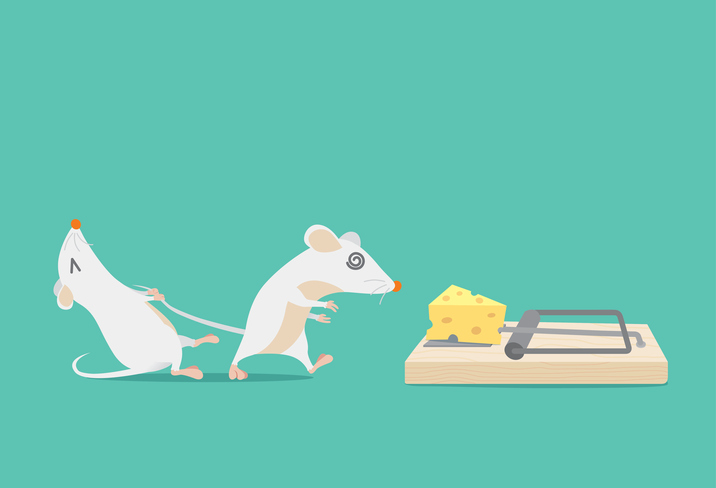 As you might already know, a trap is a device used for catching animals or birds or, figuratively, any trick for catching someone by surprise. A situation that’s hard to escape from is also a trap. And did you know that, as a slang term, trap means ‘mouth?’ Traps, always in the plural, are the percussion instruments of a jazz or dance band. As a verb, to trap means ‘to catch with a trap or a trick,’ or ‘to confine by or as if by a trap.’

Trap music is a subgenre of Southern hip hop. It originated in the 1990s and was originally a reference to places where drug deals took place, which were known as traps in regional US slang. As an example of trap music, you can listen to Future’s song “Turn on the Lights” here:

A trap is a movable covering for a pit or drop, which is designed to give way when it is trodden on, so that your prey falls into the pit. From this, it has also come to be the name for any sort of door that is flush with a floor and that lifts to reveal an opening with a staircase or ladder. This is also known as a trapdoor. Trap can also refer to the opening itself or to the ladder or staircase.

Trap dates back to before the year 1000. The Old English træppe, and later the Middle English trappe, meaning ‘contrivance for catching someone (or some animal) unaware,’ can be traced back to the Proto-Germanic trep– (something on or into which you step) and the Proto-Indo-European root dreb– (and extended form of der-), meaning ‘to run, walk or step.’ It is related to the Middle Dutch trappe (trap or snare), the Old French trape and the Spanish trampa (trap), many Germanic words for stair, step or tread, such as the Middle Dutch and Middle Low German trappe and treppe, the German Treppe (all ‘step or stair’) and the English verb tread. The sense ‘deceitful practice or device’ dates back to around the year 1400, while trap as slang for mouth appeared in the late 18th century. Trap doors have been around since the late 14th century. The verb comes from the noun, and meaning ‘to ensnare, catch, capture or encircle’ (originally an animal), dates back to the late 14th century, as the Middle English trappen.

See full definition
Learn more about trap in our forums

Trap in other languages