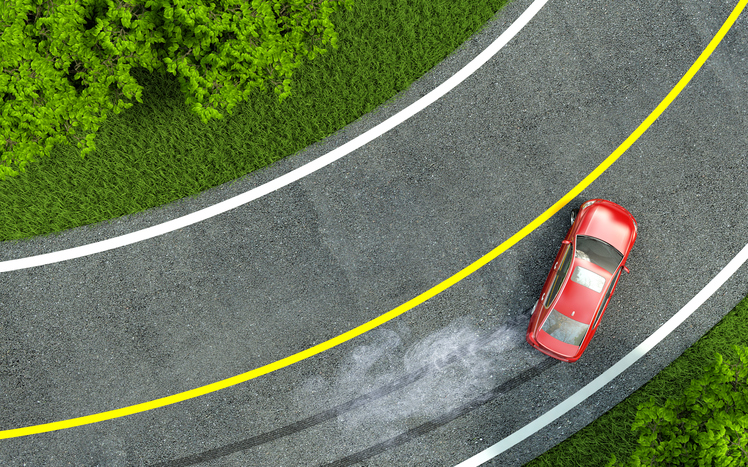 A skid is a low movable platform on which goods are placed so that they’re easy to move or handle, or a plank or bar, especially one of a pair, on which something heavy may be slid along. A skid is also an unexpected slide on a smooth surface and this is why the verb to skid means ‘to slip or slide’ mostly sideways, like vehicles sometimes do because of ice or wet, slippery road conditions. Figuratively, in US English, to skid also means ‘to fail or weaken.’

on the skids: declining or deteriorating. Example: “The business was very successful a few years ago, but it’s lost a lot of customers and it’s on the skids now.”

skid mark: the mark left by an object, often car tires, as it skids. Example: “You can see the place where the driver lost control because the skid marks start here, long before he hit that tree.”

Skid row is a US term for an area of a city where there are a lot of cheap bars and run-down hotels, which are frequented by people who have little money. Skid Row is also the name of an American heavy metal band who were popular in the late 1980s and early 1990s. You can listen to their hit song “18 and Life” here:

A skid is also a device for locking the wheel of a vehicle or slowing the wheel’s motion when going downhill. Such devices were often used on horse-drawn carriages.

Skid dates back to around the year 1600, and originally meant ‘a beam or plank on which something rests.’ It came into English from the Old Norse skið (skith), meaning ‘stick of wood,’ or a similar Scandinavian source, from the Proto-Germanic skid (to divide or split) and the Proto-Indo-European root skei– (to cut or split). It is related to the Old High German skit and the German Scheit (log), as well as the Old English scīd (thin slip of wood), the obsolete English noun schide (a piece of wood split off for timber), and the word ski. The sense of skid narrowed to ‘a beam of plank on which something heavy can be moved’ in the late 18th century. The sense ‘a sliding along’ appeared in the late 19th century, and has been applied to motor vehicles since the early 20th century. Skid mark dates back to the early 19th century as well. The idea of a skid being used to facilitate moving something downhill led to the expression hit the skids (early 19th century) and skid row (1920s). The verb comes from the noun, and dates back to the late 17th century. It originally meant ‘to apply a skid to a wheel’ (to keep it from turning). The sense ‘slide along’ first appeared in the mid-19th century, while ‘slide sideways’ (on a road) is from the late 19th century.

See full definition
Learn more about skid in our forums

Skid in other languages