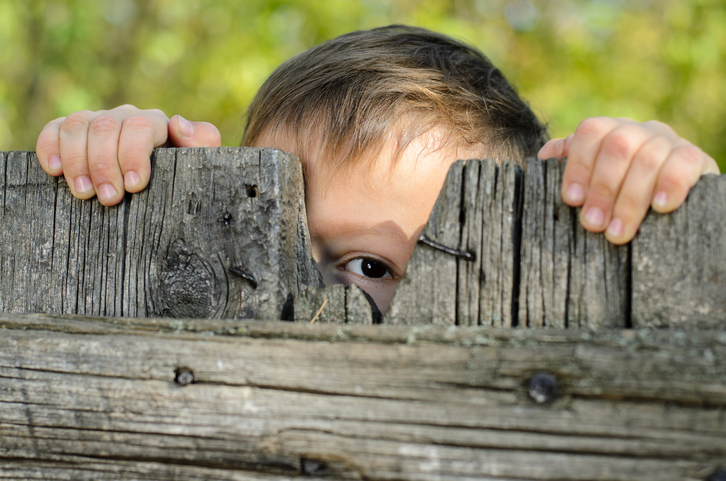 To peep means ‘to look through a small opening or from somewhere secret without others knowing you’re looking.’ By extension, peep also means ‘to look curiously and playfully, or quickly and furtively.’ It also means ‘to begin to appear’ or ‘to come slowly into view.’ As a noun, a peep is a quick and secret look or a quick glimpse of something. Unrelatedly, a peep is the short high pitched cry of young birds and, figuratively, any small sound, utterance, or complaint. To peep means ‘to make a short high pitched cry.’

Peep Show is the title of a popular UK TV show. You can see the trailer for the final series of the show here:

Peek-a-boo is a game you might play with small children where you cover your eyes with your hands and then move your hands to peek out, while saying “Peek-a-boo!” The related noun peeper, as well as being someone who peeps, is an informal term meaning “eye.” As you might imagine, it is usually used in the plural in this sense. You can listen to Souxsie and the Banshee’s song Peek-a-Boo here:

You can hear both peek-a-boo and peepers, meaning eyes, in the lyrics.

As a noun, peep can be used specifically to talk about the first appearance of daylight. So you might say, “We were up at the peep of dawn to start our long journey.” This use of the term is less common now, but you might still hear it sometimes.

To peep, meaning ‘to look at something’ (especially through a small opening), dates back to the mid-15th century. Its origin is uncertain, but some linguists believe it could have emerged as an alteration of the verb piken (which gave us the verb peek, with a similar meaning as peep). The origin of peek is also uncertain, though some linguists think it may have come from the Middle Dutch kieken. This is supported by the fact that until a few centuries ago, peek, peep and keep were used interchangeably. The noun, which comes from the verb, and originally meant ‘a furtive look, as if through a small opening’ or, more specifically, ‘the first light of day,’ dates back to the early 16th century. The meaning had expanded to ‘a quick or furtive glance’ by the early 18th century. To peep, meaning ‘to make a weak, high-pitched cry’ (usually in reference to baby birds), dates back to around the year 1400, and is probably an alteration of the Middle English verb pipen or pepen (13th century). Its origin is probably imitative, so we can find many similar examples in other languages, such as the Dutch and German piepen, the Old French piper, the French pepier, the Latin pipāre, the Greek pippízein, the Czech pípat and the Lithuanian pỹpti, though they are not actually related. The noun comes from the verb, and dates back to the early 15th century. The figurative use of both the noun and the verb became common in the early 20th century.

See full definition
Learn more about peep in our forums

Peep in other languages