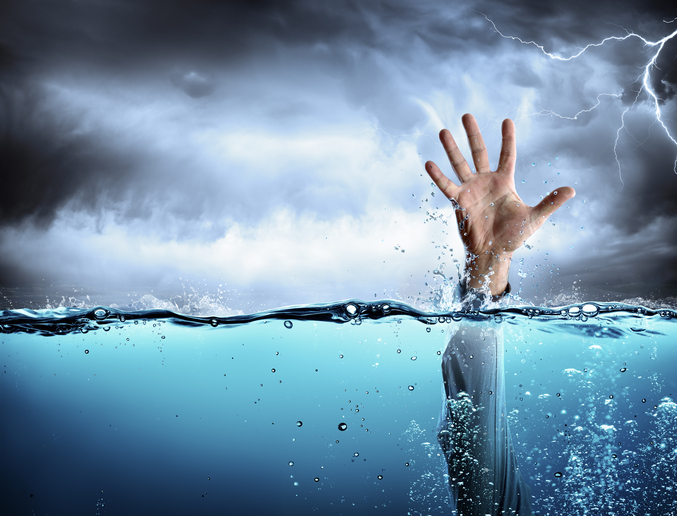 You might already know that drown means ‘to kill by putting under water’ or ‘to die under water.’ If something is destroyed by flooding, that’s also to drown and so is to ruin something by soaking it in liquid. Figuratively, we use drown, often followed by out to mean ‘overwhelm,’ like when background noise makes it impossible to hear a particular sound.

drown in (figurative): to be overwhelmed by. Example: “I’m drowning in work this week!”

drown your sorrows: drink to forget something you are unhappy about. Example: “Since his wife left him, John has spent every night drowning his sorrows in the local bar.”

Listen to The Strange Death of Liberal England’s song “Rising Sea,” from their album Drown Your Heart Again, here:

Listen out for the lyric “Drowning in a rising sea.”

If you drown food or a drink, that means that you have added too much water or liquid to it. So, for example, you might say “The chef had drowned the chicken breast in sauce.”

Drown dates back to the late 13th century. The Middle English verb drounnen probably developed from a now-lost derivative of the Old English verb druncnian (later the Middle English druncnen), which meant ‘to be swallowed up by water’ (and was usually said of ships). Drounnnen was originally used in the northern dialect, and probably also spread because of the influence of the Old Norse drunka (to be drowned). After the verb effectively split into two, the original disappeared from the English language, and left only drounnen. Though its precise origin is uncertain, most linguists believe that drown, through druncian, can be traced back to the same base as the Old English verb drincan (‘to drink,’ as well as ‘to swallow up or engulf’), from the Proto-Germanic drenkan, making it related to the Old Saxon drinkan, the Old Frisian drinka, the Dutch drinken, the Old High German trinkan, the German trinken, the Old Norse drekka and the Gothic drigkan, all of which mean ‘to drink,’ as well as, of course, the English word drink. While again, the exact origin is uncertain, many linguists trace Germanic words from this source back to the Proto-Indo-European root po(i), which would make it related to the Greek pinein (to drink), the Latin potare (to drink) potio (‘a potion or a drink,’ as well as ‘a poisonous draft or magic potion’) and imbibere (to absorb or drink in), as well as Romance language words for drink like the Spanish beber, and English words such as beer, beverage and poison.

See full definition
Learn more about drown in our forums