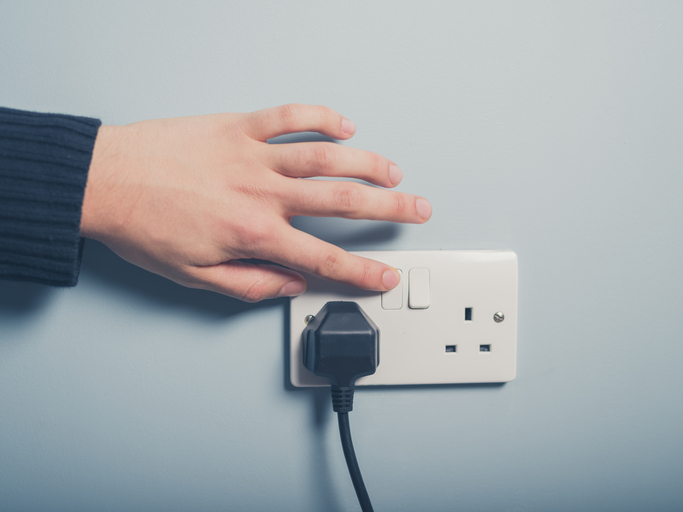 You probably know that a plug is an attachment at the end of an electrical cord that is inserted into a socket for electric power. It is also a piece of wood or other material used to stop up or block a hole or opening and, particularly, a stopper in a sink or bath to stop the water running out while you are using it. Colloquially, a plug is a favorable mention of a product in a television or radio interview. As a verb, to plug means ‘to insert a plug into something in order to get power’ and followed by in, it means ‘to connect to a power source.’ ‘To stop or block’ is also to plug and, colloquially, to plug means ‘to speak favorably about a product.’

spark plug: the device in each cylinder of an engine that produces the spark to ignite the combination of gasoline and air.

pull the plug: bring something to an end. Example: “The TV show had been losing viewers for two seasons, so the producers decided to pull the plug.”

MTV Unplugged was a US music show on the MTV channel. Its name came from the fact that the artists it featured were usually playing acoustic instruments (that means instruments that are not electric, therefore not plugged in). You can see Nirvana performing their version of David Bowie’s The Man Who Sold the World on MTV Unplugged here:

A plug is also a colloquial term for a wad or stick of tobacco, either for smoking in a pipe or for chewing.

Hair transplants are used by some balding men to regain hair on their heads. An early form of hair transplants used hair plugs—individual pieces of tissue with hair attached that were grafted onto the scalp.

Plug, meaning ‘stopper for a hole,’ dates back to the early 17th century. It was originally a term used by seamen, and came into English from the Dutch plug, which can be traced back to the Middle Dutch plugg and the Old Dutch pluggi, but its origin before then is uncertain. Most linguists agree that the origin is most likely Germanic because most of the related terms are North Germanic and Scandinavian. Some have even suggested the Proto-Germanic plugjaz, though there is not enough evidence to be certain of what the term would have looked like. Plug is related to the Norwegian plugg, Danish pløg, North Frisian plaak, Middle Low German pluck (all meaning ‘plug’), and the German Pflock (plug or peg), and probably related to the Lithuanian plúkti (to strike or hew). The Gaelic plug and the Irish breiseán both derived from the English word. The colloquial sense ‘a piece of chewing tobacco dates back to the early 18th century, and is based on physical resemblance. The electrical sense dates back to the late 19th century, as does the ‘sparking device in an internal combustion engine’ meaning. The advertising sense was first used in US English in the early 20th century, and possibly came from the verbal sense ‘to work tirelessly at something.’ The verb, meaning ‘to close tightly or fill a hole,’ also dates back to the early 17th century. It may have come from the noun, or it may have come into English from the Dutch verb pluggen. The sense ‘to work tirelessly at something’ dates back to the late 19th century, while the advertising sense, like the noun, was first used in the early 20th century.

See full definition
Learn more about plug in our forums

Plug in other languages