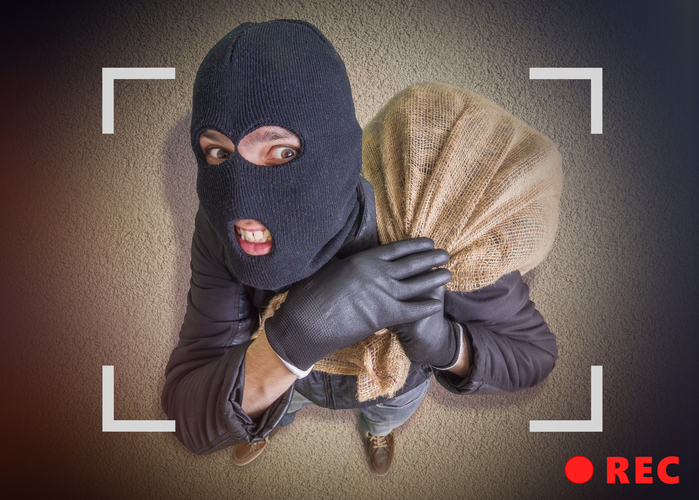 It looks like this guy has been caught on camera with his swag.

A swag is a suspended garland, piece of drapery, or similar, fastened up at or near each end and hanging down in the middle. The related verb to swag means ‘to adorn with such a garland,’ ‘to hang loosely or heavily,’ and also ‘to move unsteadily from side to side or up and down.’ Swag is also a slang term for money or valuables stolen. In Australian English, a swag is a traveler’s bundle with personal belongings or cooking utensils and also a verb that means ‘to travel with such a bundle.’

In Australia, someone who travels with a swag is known as a swagman. One of Australia’s most famous bush ballads (a kind of Australian folk song), “Waltzing Matilda,” is about a swagman and you can listen to it here:

You’ll also hear references in the lyrics to the swagman’s tucker bag; regular readers of Word of the Day may remember from the word tuck that tucker means ‘food’ in Australian and New Zealand slang.

In US English, if you say someone has swag, it means they have a lot of self-confidence. Example: “That guy has serious swag!” It probably emerged as a shortened form of swagger.

Since the late 1990s, swag has also been used to mean the free promotional gifts, such as pens, that companies give away at expos and conventions. It emerged as an acronym for Stuff We All Get. A swag bag is a collection of gifts given by sponsors to important guests at conventions, parties or award shows, and depending on the importance of the event (and the guests), they can be worth thousands of dollars. Here’s a short video showing off some of the things nominees got from sponsors at the Oscars recently:

Swag, meaning ‘to move unsteadily or heavily,’ dates back to the early 16th century. It probably came into English from a Scandinavian source, such as the Old Norse sveggja (to swing or sway). It can be traced back to the Proto-Germanic swengwanan, though its origin before then is uncertain. It is related to the Norwegian svaga or svagga (to sway or rock), as well as the Old Saxon and Old High German swingan, the Old Frisian swinga and German schwingen (all meaning ‘to swing, swingle or oscillate’), and the English words swing and sway. The noun, meaning ‘a lurching or swaying,’ comes from the verb, and dates back to the mid-17th century. Swag, as a noun meaning ‘ornamental garland,’ is of uncertain origin. Some linguists think it is a different development from the same verb, which first appeared in the late 18th century. Others, however, point to swage, which meant ‘ornamental molding’ and was used around the 14th century. In this second theory, swage came into English from the Old French souage (ornamental molding) from soue (rope), which can be traced back to the Vulgar Latin soca, and is probably of Gaulish origin. It is related to the Modern French suage, as well as the Breton sug (cord) and the Spanish soga (rope). If this is the origin of this sense of swag, the noun was probably brought back from disuse in the late 18th century, with a slightly different meaning. A few have even suggested an origin that includes influence from both of these sources. The verb, meaning ‘to adorn with a garland,’ comes from this meaning of the noun, and dates back to the early 19th century. The sense ‘stolen property or loot’ dates back to the mid-19th century, and was originally UK slang. It emerged from an obsolete sense of swag, meaning ’round bag.’ This same obsolete meaning gave us the Australian swag, which was popularized in the late 19th century.

See full definition
Learn more about swag in our forums

Swag in other languages