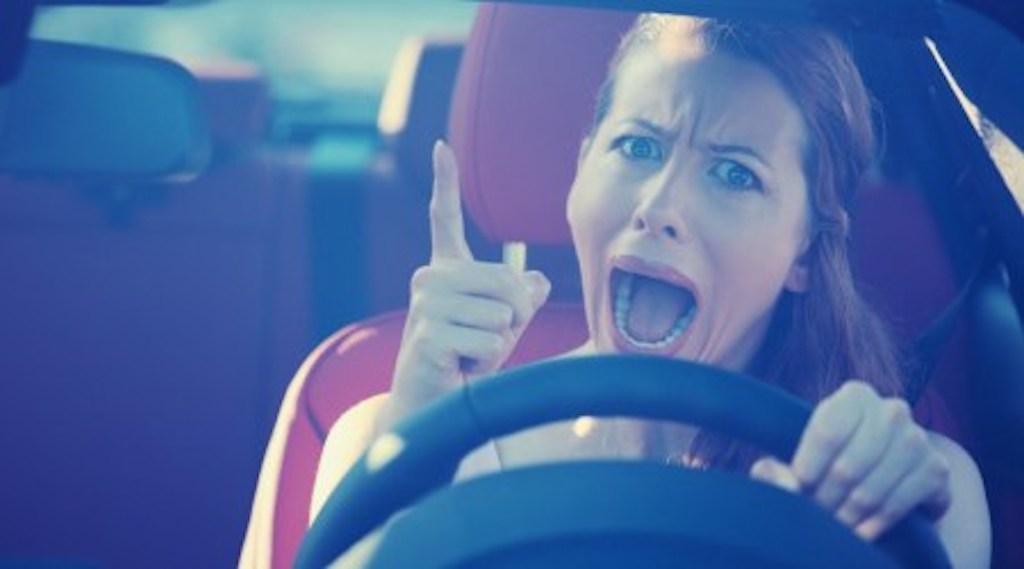 A woman cursing at other drivers

A curse is something that is said to cause someone misfortune or, figuratively, something that causes pain and trouble. It also means ‘swearword.’ As a verb, to curse means both ‘to wish misfortune upon someone or something’ or ‘to say one or more swearwords.’ In addition, it means ‘to complain about something, possibly using swearwords.’

be cursed with: suffer from. Example: “She was cursed with two left feet and couldn’t dance at all!”

be cursed to: have to do something because of a curse. Example: “The princess was cursed to sleep for one hundred years.”

Watch a clip from the claymation (clay animation) movie Wallace and Gromit: The Curse of the Were-Rabbit here:

If you say “John cursed” or “John cursed at someone,” it means that John is using swearwords; curse in this sense is an exact synonym of the verb swear. However, in the expression “John cursed somebody (or something),” then John is specifically wishing that person or thing ill or complaining about them; if John has magical powers, it can also mean that John put a curse on them.

Menstruation is colloquially known as “the curse.” This is sometimes assumed to be because God cursed Eve with menstruation for eating the forbidden fruit, but actually God cursed Eve with pain in childbirth. However, religions have often created taboos around menstruation, so there may be a connection. There are many other euphemisms to refer to menstruation, such as Aunt Flo (normally in the phrases “Aunt Flo is in town” or “Aunt Flo is visiting”) or somebody might say she “has the painters and decorators in.” These euphemisms are sometimes considered old fashioned, and many women just say “I have my period” (period is another word for the menstrual cycle).

Curse dates back to before the year 1050, in the form of the Old and Middle English noun curs. Its origin is uncertain. There are no related Germanic, Romance or Celtic words. In late Old English, curs meant ‘a prayer that evil or harm should come to someone,’ so some linguists think curse may have come from the Latin cursus (course), which was the name given to the ‘set of daily liturgical prayers,’ and used in the ‘sentence of the great curse,’ which was the formula read in churches to excommunicate offenders four times a year. Other linguists have proposed a relation to the Old French curuz (anger), but there is scant evidence for it, and some have also suggested a link to the word cross, but this is considered highly unlikely. The senses ‘evil invoked upon someone’ and ‘something that causes severe trouble’ both appeared in the 14th century. Curses (always in plural), has been used as a histrionic exclamation wince the mid-17th century, and the sense of curse as a swearword evolved from this use. The curse, as the sentence imposed on Adam and Eve in the Bible, was first recorded in the 19th century, and the curse as a euphemism for menstruation has been used since the 1930s. The verb also dates back to before the year 1050, in the form of the Old English cursian and later the Middle English cursen. It came from the same (unknown) source as the noun.

See full definition
Learn more about curse in our forums

Curse in other languages