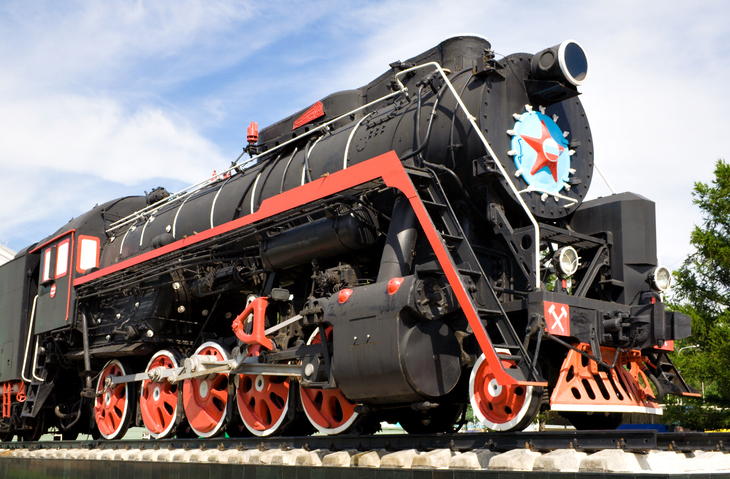 A chuff is a rude, impolite, or unmannerly person, or someone reluctant to spend money. It can also be used to talk about a simple person, and also about someone from the countryside. As an adjective, chuff means ‘chubby or fat,’ and also ‘swollen with pride.’ These meanings were never very popular in the US and are now somewhat dated in UK English, where slang meanings of chuff (which we’ll tell you about below) have become much better known. Unrelatedly, chuff is the sound an exhaust of a steam engine makes, and the verb means ‘to proceed with such sound.’

Ivor the Engine was a UK children’s animated TV series about a steam engine that chuffed along a railway line in Wales. It was originally made for black and white television in 1958, using stop motion techniques, and was brought back in 1975, when new color episodes were made. It was broadcast on the BBC. You can see an episode of Ivor the Engine here:

In the UK, chuff is a slang word for the anus. In more recent times, it has come to be a slang word for the vagina (this meaning is now more common). You may hear it in this sense in the expression “Tighter than a gnat’s chuff,” which means ‘very tight with money,’ (which, interestingly, recalls the sense of a miser, mentioned above). A gnat is a tiny flying insect, so its chuff (whichever hole you might mean by the word) would be very tight indeed. Still in the UK, chuff can also be used in place of swearwords, especially the very rude one starting with “F.” If you are in a situation where you can’t swear, you might call someone a “Chuffing idiot,” for example. However, the related adjective chuffed is used more than any of the slang senses of chuff and it means ‘very happy or pleased.’ Example: “Joy was chuffed to discover she’d won first prize.”

It isn’t only steam engines that make a chuffing sound, some big cats do too. Prusten, or chuffing or chuffle, is a sound made only by tigers, snow leopards, and clouded leopards. You can read more about it here, and you can hear a tiger chuffing here:

Chuff, as a noun meaning ‘a rude or impolite person,’ as well as ‘a simple person’ or ‘someone cheap with money’ dates back to the mid-15th century, as the late Middle English chuffe. Its origin is uncertain. This sense has also been used as an adjective since the early 19th century, to refer to someone who is ‘surly or displeased,’ though this use has practically disappeared. The adjective chuff, meaning ‘chubby or fat’ as well as, figuratively, ‘swollen with pride,’ dates back to the early 17th century. While its origin is also uncertain, some linguists think it evolved from an earlier sense of chuff, meaning ‘puffed cheek,’ and trace it back to the Middle English cholle (jowl, flap of skin under the jaw, or double chin). Some linguists also believe that this sense is related to the previous one, with the idea of someone coarse or impolite as ‘fat-headed.’ Finally, chuff, as a noun meaning ‘the sound of a steam engine’, dates back to the early 20th century, and its origin is imitative. The verb comes from the noun, and appeared around the same time. Chuff, meaning a breathy sound made by big cats, also comes from this sense.

See full definition
Learn more about chuff in our forums

Chuff in other languages