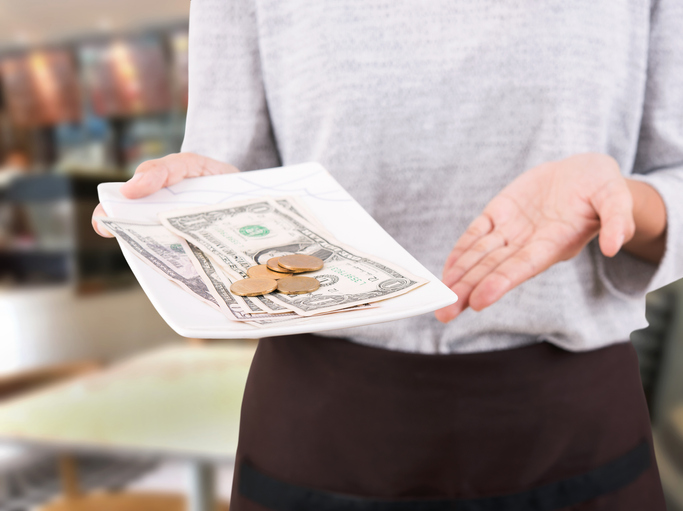 A tip is the pointed end or the top of something, and also a small piece covering the end of something. The related verb means ‘to provide with a tip’ or, most often in the passive voice, ‘to mark the tip of.’ However, as a verb, tip can also mean ‘to tilt’ or ‘to overturn or tumble.’ The related noun is the act of tipping or the state of being tipped. Additionally, a tip is a money gift you pay over and above payment for something, a secret piece of information, or a useful hint or idea about something. As a verb, it means ‘to give a gift of money over and above payment.’

be on the tip of your tongue: we say this about things we can’t quite remember. Example: “Oh, what was the name of that guy you used to work with? It’s on the tip of my tongue!”

tip someone off: give someone a secret piece of information. Example: “Neighbors tipped the police off about suspicious activity in the house.”

tip-off: a secret piece of information. Example: “Police raided the house after receiving a tip-off.”

tip your hand (US): accidentaly reveal plans, feelings, or something else you meant to keep secret. Example: “The businessman couldn’t say too much about the takeover bid without tipping his hand.”

tip of the iceberg: a small part of a much larger issue or problem. Example: “The building inspector told us that the damp we had noticed in the walls was just the tip of the iceberg. The house needed a lot of repairs.”

tiptoe: if you are on tiptoe or tiptoes (both versions are correct) that means you have raised yourself onto the tips of your toes to make yourself taller or to move quietly. Example: “Tania stood on tiptoe to get the cookie jar down from the shelf.” You can also use tiptoe as a verb, in which case it means to walk on the tips of your toes, usually to avoid making noise. Example: “The parents tiptoed out of the sleeping baby’s room.”

Listen to Roy Clark singing “The Tip of My Fingers” here:

In UK English, the tip is the place you take any garbage or other items you want to throw out that are too big to go out for collection with your usual household waste. Officially, tips are now usually called recycling centers, but in everyday language, most people will still tell you they are taking something to the tip. In US English, this place is called the dump.

In the US, tipping people who provide you with a service is not only common, but often expected. In restaurants and bars, it’s common practice to tip 15% or 20% of the total of your meal or drinks, and people often give more than that if the service was good. When traveling, it is also expected to tip taxi drivers, the bellhop at the hotel for helping you with your luggage, and even the person who cleans your room at the hotel (that tip should be left in the room on the day you leave, and many hotels even leave a small envelope on the night stand for this purpose). In the UK, you are not expected to tip, but you can do so if you like. Generally, it’s considered a nice thing to do if you have received especially good service or exceptionally good food, but it isn’t necessary and, if you do give a tip, it’s up to you how much you give. Since tipping varies so much from country to country, it’s a good idea to look up the tipping practices in a country before you travel there.

Tip, meaning ‘the pointed end of something’ or ‘a metal attachment on the end of something’ has not changed since Middle English. Linguists disagree over its origin. Some believe that it came into English from the Middle Low German or Middle Dutch tip (extremity or tip), or from a Scandinavian source, such as the Old Norse typpa, in the late 12th or early 13th century, while others think that it already existed in Old English, though no records of it survived. Either way, tip can be traced back to the Proto-Germanic tuppijo, a diminutive of tuppaz (top). It is related to the East Frisian Tip, the West Frisian tip or tippe, the Dutch tip, the Low German Tip, the Danish tip, the Swedish tipp and the Albanian thep (all meaning ‘tip’), the Icelandic typpi (knob, pin or penis), and the German Zipfel (tip, originally a diminutive of Zip), as well as the English top. The verb, meaning ‘to put a tip on,’ or ‘to mark the tip of something,’ dates back to the late 14th century, and comes from the noun. Tip, as a verb meaning ‘to tilt, tumble or overturn,’ dates back to the early 14th century, in the form of the Middle English verb typen, later tipen. Its origin is also uncertain. Some linguists think it may have come into English from a Scandianavian source, making it related to the Swedish tippa (to tip or dump), while others say it evolved from a specific use of the noun (the pointed end of something). The intransitive sense ‘to fall over or be overturned’ first appeared in the mid-15th century. The related noun, meaning ‘the act of tipping’ or ‘the state of being tipped’ comes from the verb, and dates back to the early 15th century. Tip also means, as a verb, ‘to strike sharply’ or ‘occur suddenly,’ and dates back to the early 13th century. The origin of this form of the verb is also uncertain, it may have come from a specific use of the noun tip (a sharp point) or evolved from the verb tap. The sense expanded to include ‘to strike sharply but lightly’ in the mid-16th century. The related noun, meaning ‘a sharp but light blow’ comes from the verb, and dates back to the mid-15th century. The verb tip, meaning ‘to give a gratuity for a service,’ comes from this last verb (to strike lightly). It originally meant ‘to give, hand or pass’ and appeared around the year 1600 as thieves’ slang. The sense soon came to include ‘to give a small amount of money as a gift,’ and by the early 18th century, was commonly used the way we use it now. The sense ‘to pass private information’ was first seen in the late 19th century. The noun, meaning ‘a small gratuity for a service’ dates back to the mid-18th century, and comes from the verb, while the sense ‘a piece of confidential information’ is from the mid-19th century, and was therefore used before the verb.

See full definition
Learn more about tip in our forums

Tip in other languages