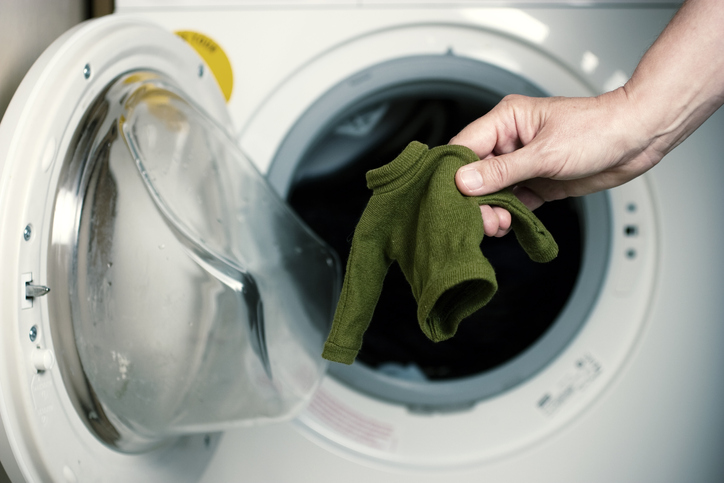 If something contracts or lessens in size we say that it shrinks, and we also say it if something becomes reduced in extent, amount, or value. If we are talking about a movement made by a person or an animal, shrink means ‘to move back suddenly, as if scared’ and it’s usually followed by an adverb, such as “back” or “away.” It can also be used more figuratively, followed by the preposition “from,” to mean ‘to be reluctant’ to do something. As a noun, shrink is a slang term for a psychotherapist, psychiatrist, or psychoanalyst.

shrink wrap or shrink film: A clear plastic material used for wrapping that shrinks when heat is applied. When used as a verb, to shrink wrap something means to wrap it in this material, and apply heat. Example: “Shirley had the vase she bought as a present for her mother-in-law shrink wrapped, and put a red bow on it before she put it under the Christmas tree.” The term shrink wrap is also sometimes used in the US to refer to plastic wrap or plastic film, which is a similar clear plastic material that clings to itself, used to wrap foods to preserve them (though no heat needs to be applied). This material is usually called cling film in the UK.

shrinking violet: a shy person. Example: Marcia is such a shrinking violet! She always hides in the corner of the room at parties instead of talking to new people.

Honey, I Shrunk the Kids is a movie about an inventor who accidentally makes his children tiny. You can watch the trailer for it here:

Some materials shrink more than others in the wash. This is particularly true of denim, especially if it is untreated. One advantage of this, is that you can get denim jeans that are too large to fit you perfectly by deliberately shrinking them. One popular method is to put the jeans on and get in the bath, as can be seen in this Levi’s advertisement from the 1980s:

If you’d like to know more about different methods for shrinking your jeans for a perfect fit, you can find some information here.

Shrink dates back to before the year 900. The Old English verb scrincan (pronounced “shrincan”) and Middle English schrinken originally meant ‘to contract or shrivel up, ‘to draw in your limbs,’ ‘to wither’ or, figuratively, ‘to pine away.’ It can be traced back to the Proto-Germanic root skrink-, probably from the Proto-Indo-European root sker– (to bend). Shrink is related to the Middle Dutch Schrinken and the Swedish skrynka (to shrink), and the Norwegian skrukka (old, shrunken woman), as well as the Latin curvus (bent or curved) and crispus (curly), the Old Church Slavonic kragu (circle), the Greek kirkos (ring) and koronos (curved), the Spanish, Portuguese and Italian curva and the French courbe (curve), and English words such as arrange, circle, circuit, circumference, circumspect, circus, crepe, crest, crisp, crown, curb, curve, derange, flounce, ring, ranch, range, rank, research, ridge and search. The sense ‘to become reduced in size,’ now the most common, was first used in the late 13th century, which ‘draw back or recoil,’ originally figurative (based on the behavior of snails, some think) is from the early 14th century. The transitive sense ‘to cause to shrink’ first appeared in the late 14th century. The noun, meaning ‘the act of shrinking,’ dates back to the late 16th century. The colloquial sense ‘psychiatrist or psychologist’ was first used in the 1950s, and is a shortened form of head-shrinker, common slang for psychiatrist, psychologist or therapist at the time.

See full definition
Learn more about shrink in our forums

Shrink in other languages