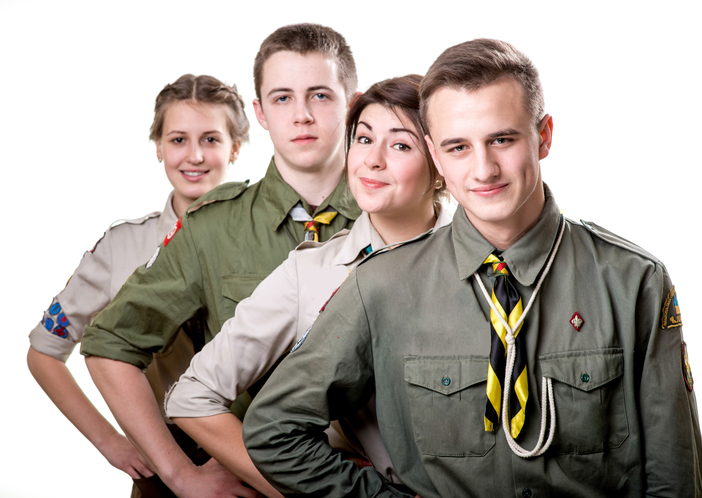 You might be familiar with Boy or Girl Scouts, young boys and girls gathered in organizations whose goals are the development of character, self-reliance, and usefulness to others. More broadly, a scout is a person sent out to obtain information, especially in the military, but also a person sent out to discover new talents in sports or show business. Informally, a scout can be a synonym for person, usually either as a term of address or an approving description, although this sense is now dated. The related verb to scout means ‘to act as a scout’ and ‘to make a search.’

The Last Boy Scout is a 1991 movie starring Bruce Willis. You can see the movie trailer here:

Scout is also the nickname of Jean Louise Finch, the narrator of Harper Lee’s novel To Kill a Mockingbird. We are never told why that is her nickname, but it’s probably because she is a very curious and inquisitive child. You can see Scout in this clip from the movie adaptation of the novel below, and you can read the beginning of the novel  by clicking here:

Scout, meaning ‘to travel in search of information’ or ‘to explore and observe’ dates back to the mid-14th century, in the form of the Middle English verb skowten. It came into English from the Old and Middle French escouter, meaning ‘to listen or heed,’ which can be traced back to the Late Latin ascultāre and the Latin auscultāre (to listen), from the noun auris (ear), from the Proto-Indo-European root ous– (ear). Scout is related to the French écouter, the Spanish escuchar, the Portuguese escutar and the Italian ascoltare (all meaning ‘to listen’), as well as the Greek aus, the Lithuanian ausis, the Old Church Slavonic ucho and the Old Irish au (all meaning ‘ear’), the Avestan usi (the two ears), and the English word ear. The noun comes from the verb and, meaning ‘person who goes out to gain information,’ dates back to the mid-16th century and comes from the verb. Scout (capitalized as a proper noun), meaning a member of the Boy Scouts or Girl Scouts, dates back to the founding of the Boy Scouts in the early 20th century. Scout, a rare verb meaning ‘to reject with scorn’ or ‘to mock,’ is unrelated. It dates back to around the year 1600, and came into English from a Scandinavian source, such as the Old Norse skuta or skute (to taunt). Scout can be traced back to the Proto-Indo-European root skeud– (to shoot, chase or throw), and is related to the Sanskrit skundate (hastens, makes haste), the Old Church Slavonic iskydati (to throw out), the Lithuanian skudrus (quick or nimble), the Old Norse skjota (to shoot with a weapon), and several English words, including sheet, shoot, shot, shout, shut, shuttle and skeet.