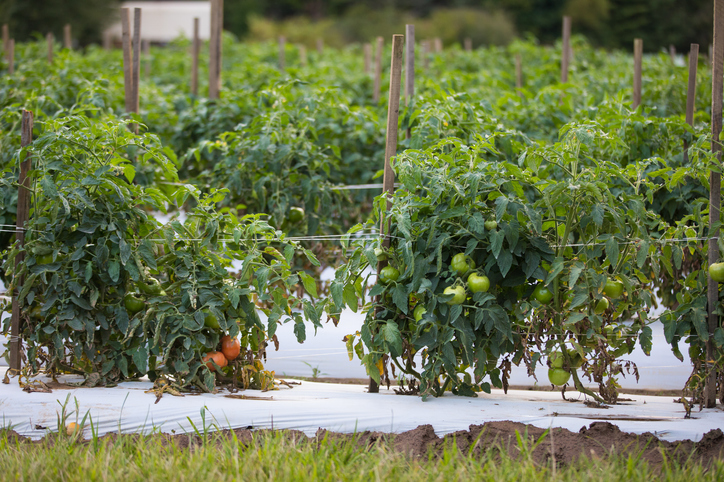 A stake is a stick pointed at one end for driving into the ground as a boundary mark, one of the supports for a fence, a support for a plant, or to tie an animal to. It is also a post to which a person is tied for execution, usually by burning. The stake is that punishment. As a verb, usually followed by the adverb out, to stake means ‘to mark land with a stake’ or ‘to claim or reserve a share of as if by marking with stakes.’ Stake is also money bet in a game or an investment in business, with the hope of financial gain. A personal interest is a stake too. As a verb, it means ‘to risk something on the outcome of an uncertain event’ and also ‘to provide someone with resources or money.’

pull up stakes: move your home, especially if you are moving far away. Example: “Because he couldn’t get a job locally, Josh decided to pull up stakes and try his luck in Berlin.”

stake out: keep something under watch. Example: “The police were staking out the suspected drug den.”

at stake: at risk. Example: “If this business fails, all our jobs are at stake.”

If you stake something out, then you are on a stakeout, and Stakeout is the title of a 1987 movie, starring Richard Dreyfuss and Emilio Estevez. You can see the movie trailer here:

A stake is also part of the hierarchical organization of the Mormon Church. Each stake oversees several wards, or congregations.

Stake dates back to before the year 900. The Old English noun staca (stake in Middle English), meaning ‘pin or stake,’ can be traced back to the Proto-Germanic stakon and the Proto-Indo-European root steg– (pole or stick). Stake is related to the Old Norse stiaki, the Danish stage, the Old Frisian stake, the Middle Dutch stake, the Dutch staak and the German Stake, all meaning ‘stake,’ as well as the English word stick. Some Romance language equivalents, such as the Old French estaque, the Spanish estaca and the Italian stacca (all meaning ‘stake’), also came from the Germanic term, and they eventually circled back to English as the verb attach. The meaning ‘a post on which a person is tied for execution’ first appeared around the year 1200, while stake meaning ‘something put up as a wager’ or ‘something placed at hazard’ dates back to the early 16th century. The origin of this meaning is uncertain, though some linguists think it may have evolved from a literal post on which gambling wagers were placed (there is very little evidence for this theory). The sense ‘a personal interest,’ or ‘something to gain or lose’ evolved from the previous one in the early 18th century. The verb, meaning ‘to mark land with stakes,’ comes from the noun, and dates back to the early 14th century. There was, however, an Old English verb, staccan, which meant ‘to pierce something with a stake or pin.’ This verb fell out of use around the time stake stopped meaning ‘pin,’ in Middle English, so it is not considered the origin of the modern verb stake. The sense ‘to risk or wager’ dates back to the early 16th century, and comes from the equivalent noun sense. Finally, to stake (out), meaning to surveil, dates back to the 1940s. It was first used in US English, and is probably a figurative take on the idea of ‘marking territory.’

See full definition
Learn more about stake in our forums

Stake in other languages