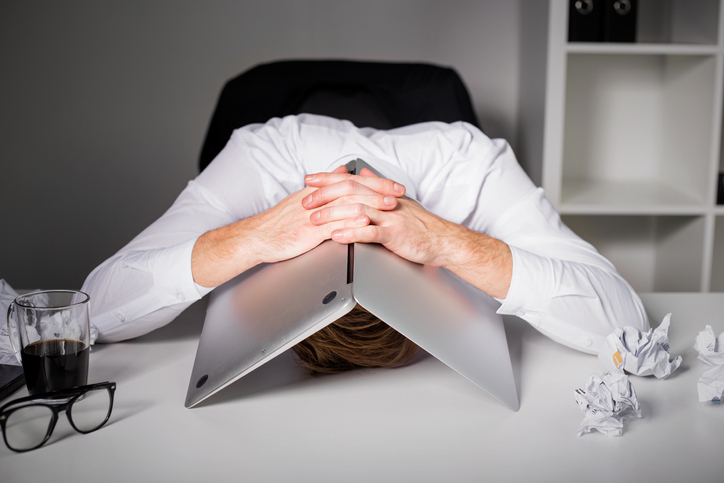 Computer glitches can be annoying.

A glitch is a minor defect or malfunction in a machine or system, a setback in a plan, or an error on a computer. If we are talking about electric circuits, a glitch is a sudden interruption or surge in electric power. The related verb to glitch means ‘to experience a glitch.’

Glitch is also the title of an Australian TV show, in which there seems to have been a major glitch in the usual progression of life and death. You can see the trailer for the first series here:

In astronomy, a glitch is a change or irregularity in the rate of rotation of a pulsar (a rotating neutron star that emits pulses of radiation).

Glitch art is a type of art that is created by purposely using digital or analog errors for aesthetic effects. While errors have been used this way purposely in art since the early 20th century, glitch art, especially in digital art, uses visual or auditive glitches. Glitches also became popular in electronic music in the 1990s, when glitch music (specifically using glitches and electronic noise as part of electronic music) took off. In both glitch art and glitch music, some of the most popular glitch creation methods are data manipulation, misalignment, misregistration, distortion and hardware failure. Nowadays, there are even apps and websites that help you create your own glitch art. If you want to try your hand at it, we suggest this image-based glitch generator.

As English words go, glitch, meaning ‘a defect or malfunction,’ is very new. It dates back to the 1940s, though it was only used by radio and television engineers (meaning ‘a momentary issue with the signal’) until the 1960s, when it became popular after having been used during broadcasts by the U.S. Space Program. It is thought to have come into English from the Yiddish (a Jewish German dialect) glitsh, meaning ‘a slip,’ from glitshn (to slip), from the German glitschen (to slip) and gleiten (to glide), though a few linguists have also suggested that it came into the language directly from German. Either way, it can be traced back to the Proto-Germanic glidan and the Proto-Indo-European root ghel– (to shine). Glitch is, therefore, related to the Old Saxon glidan, the Old Frisian glida and the Old High German glitan (all meaning glide), as well as the Sanskrit harih (yellow) and hiranyam (gold), the Old Persian daraniya– (gold) the Greek khloros (greenish-yellow color), the Latin helvus (yellowish), the Old Church Slavonic zlutu, Polish żółty and Russian zeltyj (yellow), the Latin galbus (greenish-yellow), the Old Church Slavonic zelenu, Polish zielony and Russian zelenyj (green), the Old Irish glass and the Welsh and Breton glas (‘green’ or ‘gray, blue’), the Old Norse gulr (yellow), the Old Church Slavonic zlato, Russian zoloto and Gothic gulþ (gold), and many English words, such as arsenic, chlorine, chlorophyll, cholera, cholesterol, gild, glad, glance, glare, glass, glazegleam, glee, glimmer, glimpse, glint, glisten, glitter, gloat, gloss, glow, gold, melancholy and yellow.

See full definition
Learn more about glitch in our forums

Glitch in other languages