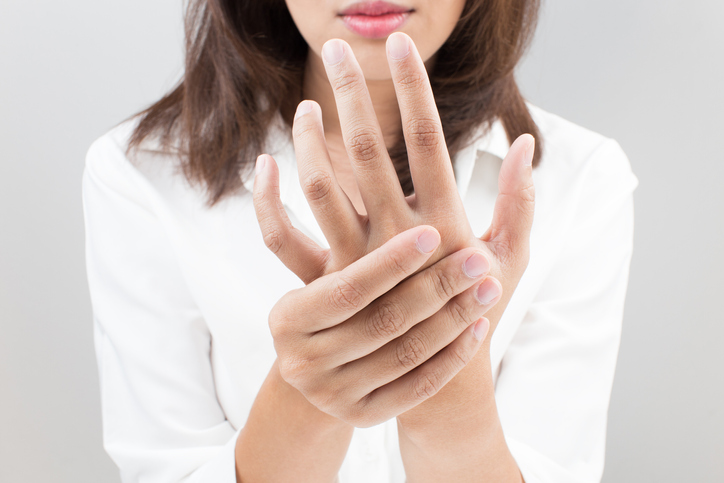 Numb is an adjective that has two meanings: ‘unable to feel physical sensations,’ and ‘without emotion.’ It is also a verb that means ‘to remove the ability to feel sensation, either physically or emotionally.’

be numb to something: not be affected by something. Example: “There’s no point in making fun of me. I’m numb to your insults!”

Numb is the title of a 2007 movie starring Matthew Perry, the actor who played Chandler on the TV series Friends. You can watch the trailer here:

You know that feeling when your leg goes numb, often because you don’t move it for a while? In English we say that a body part “is asleep” or “fell asleep.” The sensation can also be called “pins and needles.” For example, “When I sit on the floor for too long, sometimes my foot falls asleep.” Or, “When I feel pins and needles in my leg, I try to stand up and walk around until the sensation goes away.”

Some of the earliest ways doctors numbed patients included using alcohol, opium, and ether. Other methods included magnets and hypnosis.

Numb dates back to around the year 1400, as the late Middle English nome, which literally meant ‘taken or seized,’ but was also used figuratively meaning ‘without emotion or feeling’ (based on the idea of being taken by shock, emotion or cold). It was originally the past participle of the verb nimen (to take or seize) from the Old English niman (to take, grab or catch). It can be traced back to the Proto-Indo-European root nem– (‘to take’ or ‘to assign or allot’), and is related to the German nehmen (to take), the Greek nemein (to deal out) and nemesis (just indignation), the Latin numerus (number), the Lithuanian nuoma (rent or interest) and the Middle Irish nos (custom or usage), as well as English words such as agronomy, astronomy, autonomous, autonomy, economy, enumerate, gastronomy, innumerable, metronome, namaste, nemesis, nimble, nomad, number, numeral and taxonomy. It has been used figuratively since the mid-16th century. The verb also dates back to the mid-16th century, and comes from the noun. As for the change in spelling, the final b appeared in the 17th century, and had more to do with conforming to other, similar ending words (like comb or limb) than the evolution of the word itself.

See full definition
Learn more about numb in our forums

Numb in other languages