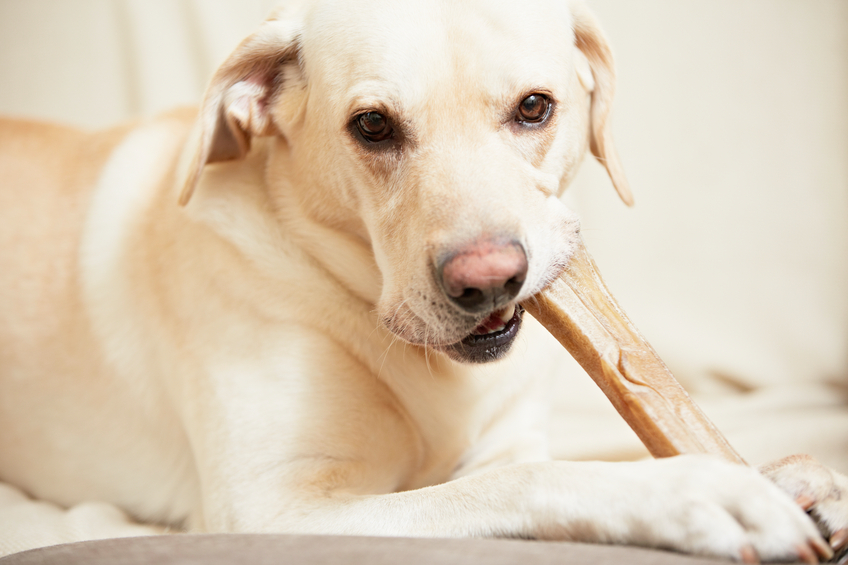 A dog chewing on a bone

To chew means ‘to crush with the teeth,’ as when eating, and ‘to tear something by chewing,’ mostly like dogs do with things around the house (in this sense it is sometimes used with on). Figuratively, to chew, usually with the adverb over, means ‘to think about something, or consider it at length.’ As a noun, a chew is the act of chewing or the thing chewed.

chew on something: think about something. Example, “I’m not sure. I’ll have to chew on it and let you know later.”

chew the fat, chew the rag: talk, normally at length and about nothing in particular. Example: “The old men spent all day hanging out in the bar, just chewing the fat.”

chew someone out: tell someone off. Example: “The boss chewed Paul out for being late again.”

chew toy: a toy for an animal to chew on. Example: “I buy my dog a new chew toy every week because he destroys them in a couple of days.”

In the 1980s, the English candy company Rowntree’s ran an advertising campaign for their Fruit Pastilles (in the UK a pastille is a soft, chewy candy), based on the idea that you couldn’t put one of these candies in your mouth without chewing it. One of the best known advertisements shows a basketball player performing a series of impressive moves with a ball in front of a small child, who then challenges him to put the candy in his mouth and not chew it.

In the US, people take cookies very seriously. When it comes to chocolate chip cookies, most people have a preference–soft and chewy or hard and crispy/crunchy. Sometimes different proportions of ingredients can help make a cookie chewier or crunchier, and cooking time can make a difference too (if you bake the cookies for too long, they probably won’t be chewy). For many cookie aficionados, the ideal chocolate chip cookie is chewy on the inside and crunchy on the outside. Here‘s a classic chocolate chip cookie recipe. American recipes normally use volume (cups and teaspoons/tablespoons) instead of weight (grams). However, many professional bakers in the US do prefer measuring by weight because it is more precise, so you can sometimes find such recipes in more sophisticated cookbooks.

Chew dates back to before the year 1000, as the Old English verb cēowan, which later evolved into the Middle English chewen, before losing the ending (like all verbs in English did). It’s related to the Old High German verb kiuwan (modern German kauen). The noun came from the verb.

See full definition
Learn more about chew in our forums

Chew in other languages