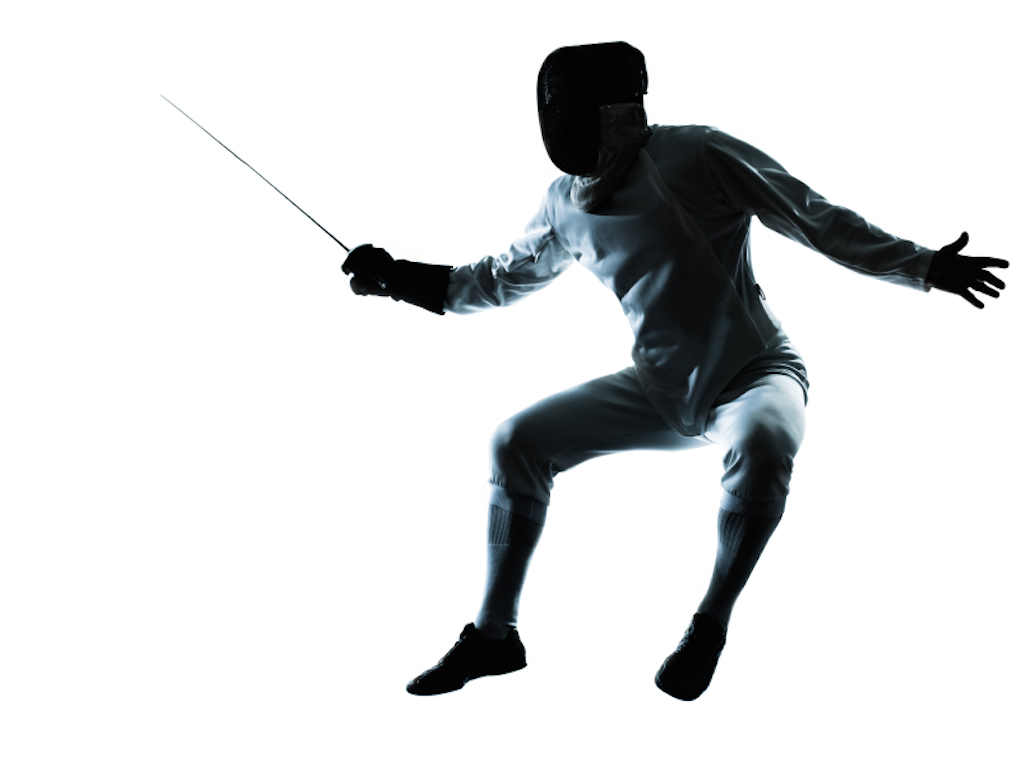 A person fencing, using a foil

Foil is a roll of extremely thin sheet metal used mainly to wrap food. It is also a person or a thing that serves as a contrast and makes another person or thing look better. As a verb, to foil means ‘to frustrate and prevent the success of a plan.’ A foil is also a flexible sword used in the sport fencing.

As a verb, foil can also mean ‘to apply foil’ or ‘to cover something in foil.’

Fencing has been practiced for centuries, mostly as a way men learned how to duel (ie, fight between two people with weapons) and defend themselves. Some believe that, at the end of the Roman Empire, German soldiers spread the practice of resolving arguments by dueling, so learning how to fight with a sword became essential. In some places, dueling was prohibited in the 15th century, but the tradition of fencing continued. It began to be seen as a sport in the 18th century, and it has been an Olympic sport since the first modern Olympic Games were held, in 1896.

The verb foil, originally meaning ‘to spoil a trace or scent by running over it,’ dates back to around the year 1300, as the Middle English verb foilen (another related verb, defoilen, actually meant the same thing and was more common). It came into English from the Old French foler or fuler (‘to trample on, injure or maim,’ and figuratively, ‘to treat badly, deceive or get the better of someone’), and can be traced back to the Vulgar Latin fullāre (to clean cloth by treading on it) and the Latin fullo (a person who cleans cloth), though its origin before then is uncertain. The sense expanded to the more general ‘to overthrow or defeat’ and ‘to frustrate the efforts of someone’ in the mid-16th century. The noun foil, meaning ‘a very thin sheet of metal,’ dates back to the early 14th century, as the Middle English foile. It came into English from the Old French foil, fueill or fueille (leaf, foliage, sheet or paper or sheet of metal), and can be traced back to the Latin folia, the plural of folium (leaf) and the Proto-Indo-European root bhel– (to thrive or bloom). Foil is related to the French fueille, the Italian foglia, the Portuguese folha and the Spanish hoja (all meaning ‘leaf’ or ‘sheet of paper or metal’), as well as the Greek phyllon (leaf), the Latin flos (flower) and derived Romance language terms like the Spanish flor and the French fleur, the Middle Irish blath and Welsh blawd (blossom or flower), the Gaelic bile (leaflet or blossom), and English words such as blade, bleed, bless, blow, blood, bloom, blossom, exfoliate, floral, flour, flower and portfolio. The sense ‘person or thing that makes another look better by contrast’ appeared in the late 16th century, and is a figurative use of the practice of backing a gem with foil to make it shine brighter. The sense ‘metallic food wrap’ was first used in the late 19th century. The verb foil, meaning ‘to apply foil,’ dates back to the early 17th century and comes from the noun. Foil, meaning ‘a light sword used in fencing,’ dates back to the late 16th century. Linguists actually disagree on whether it comes from the noun sense (a thin sheet of metal) or from the verb (to frustrate or prevent success).

See full definition
Learn more about foil in our forums

Foil in other languages