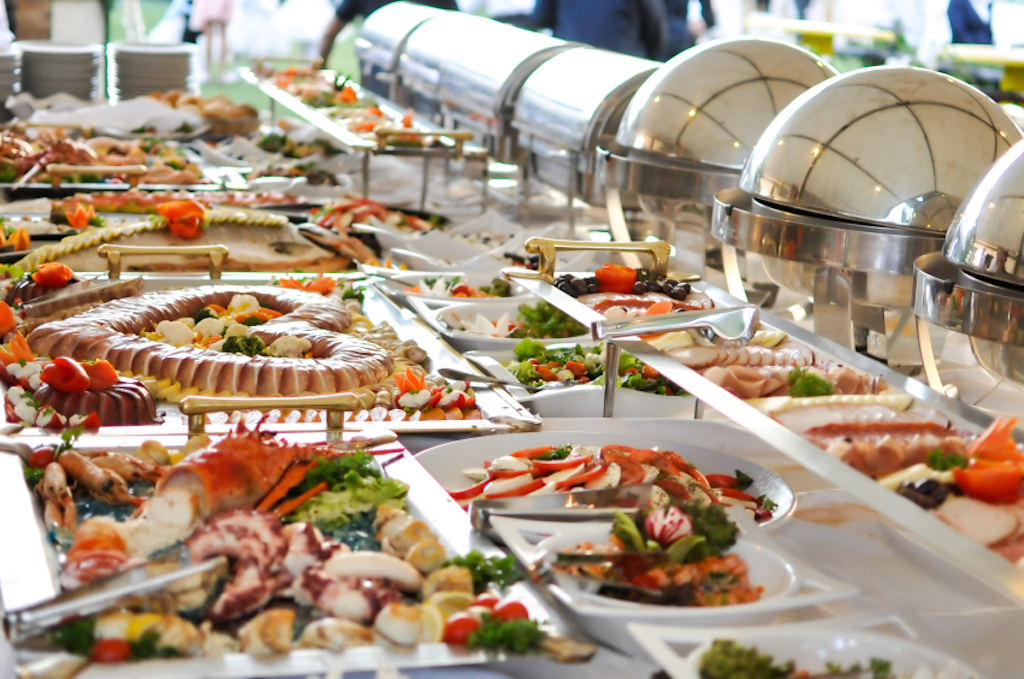 A buffet at a catered event

If you use a catering firm to provide food and drink for an event, then that event is catered. The Catered Affair is the title of a 1956 movie about a young couple who want to get married in a simple ceremony with no wedding reception, but their parents have other ideas. You can see a clip from the movie here:

In reference to food and drink, cater can be used either with the preposition for or with a direct object: ie, “cater for a party” or “cater a party.” The direct object use is more common in US English, but can also be heard in UK English. When you are talking about providing someone with what is needed or required, for is usually used if the object is a person or group of people. Example: “The museum has been remodeled to cater for people in wheelchairs.” When the object is the need or desire, either for or to can be used. Example: Our company caters to (or: for) our clients’ needs.

Cater, meaning ‘to provide food for someone or something,’ dates back to the late 14th century, and evolved from the Middle English catour, a noun meaning ‘buyer of provisions.’ It can be traced back to the Anglo-French achatour (buyer), from the Old French verb achater (to buy), which probably came from the Vulgar Latin verb accaptare, made up of the prefix ad- (to or toward) and the verb captare (to take or hold), a frequentative of the verb capere (to take), and ultimately from the Proto-Indo-European root kap– (to grasp). Cater is related to the French acheteur (buyer), the Sanskrit kapati (two handfuls), the Greek kaptein (to swallow or gulp down), the Latin capax (able to hold much or broad) and capere (‘to grasp or lay hold,’ ‘to be large enough for’ or ‘comprehend’), the Lettish kampiu (to seize), the Old Irish cacht (‘servant-girl,’ literally ‘captive’), the Welsh caeth (captive or slave), the Gothic haban (to have or hold), and English words such as accept, behave, cable, capacity, caption, captive, capture, case, catch, chase, cop, deceive, have, hawk, heavy, intercept, municipal, occupy, participate, prince, purchase, receive and recipe. The figurative sense, ‘to act as  provider of something,’ was first used in the mid-17th century.

See full definition
Learn more about cater in our forums

Cater in other languages